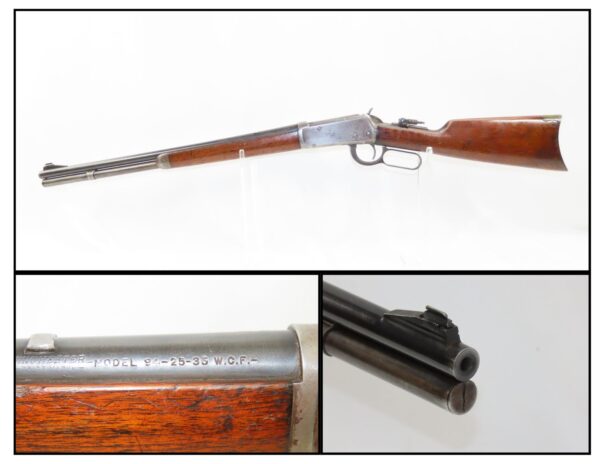 Here we present a C&R Winchester Model 1894 Lever Action Carbine, made in 1909 in New Haven, Connecticut. The credit for the design of such a prolific firearm again lies with John Moses Browning, who lent his extensive design talents to a large number of weapon types throughout his career.

The Model 1894 was the first Winchester rifle made for use with the new technology of smokeless powder and was developed as a hunting rifle. Over 7.5 million were produced from 1894 until 2006. While various cartridges were supported throughout the run of the gun, the .30-30 Winchester became its staple. In practical use, the Model 1894 became a favorite for general shooters and hunters alike. To this day, it remains a deer hunting favorite, and, in all likelihood, more deer have been taken with the 1894 than any other. The .25-35 cartridge was, and still is, a fairly short-range, medium range game cartridge. This Model 1894 Rifle features a 20-inch round barrel chambered in scarce .25-35 Winchester Center Fire  and a crescent butt plate. It also has the rear sight dovetail on the barrel plugged with a blank and a tang-mounted rear aperture sight.