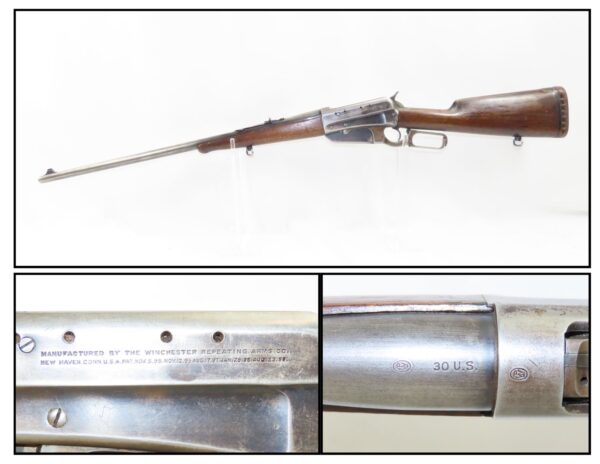 Here we present a C&R Winchester Model 1895 lever action repeating rifle manufactured in 1908 in New Haven, Connecticut, and chambered in .30 US, also known as the .30-40 Krag.

The Model 1895 rifle in .30 US is most commonly associated today with former President Theodore Roosevelt and the Battle of San Juan Hill in Cuba during the Spanish-American War. However, it was also used by many famed hunters and adventurers, to include Martin and Osa Johnson, Charles Cottar, and author Stewart Edward White. Gerrit Forbes, first cousin of Franklin D. Roosevelt, recommended the M1895 to Theodore Roosevelt who took two M1895 chambered in .405 rifles with him on his 1909 safari to East Africa. Law enforcement such as Arizona & Texas Rangers are known to have purchased these themselves.

The overall condition is very good. Some original blue/finish has been preserved. Strong, crisp action. Bright bore with strong rifling. The walnut stock is solid. The butt stock has had a butt pad added and been reprofiled. Both barrel and receiver Winchester proofs are present. The receiver is drilled and tapped on the left side. A neat rifle from the early-20th Century!