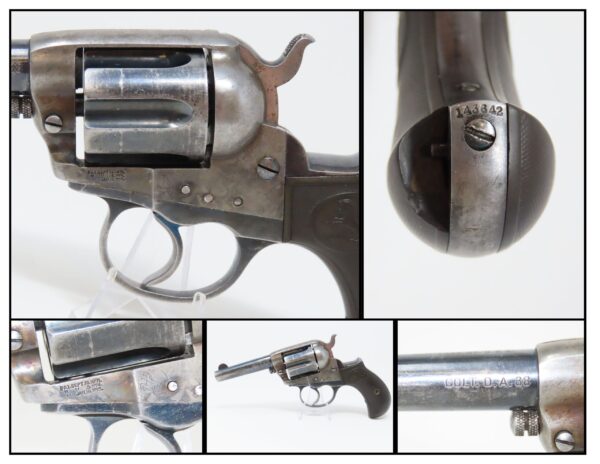 Here we present a C&R “Sheriff’s Model” Colt 1877 Lightning Double Action Revolver, made in 1903 in Hartford, Connecticut. Per the factory letter, this one was shipped with one other on 28 August 1903 to Dunham, Carrigan & Hayden Company in San Francisco, California. This was the leading supplier of wholesale hardware and mining supplies out of San Francisco at the turn of the century. It’s founders were B.R. Dunham, Andrew Carrigan, & Brace Hayden and was in business from approximately 1888 (one source says as early as 1848) through 1927.

The Model 1877 was Colt’s first venture into double action revolvers. It was quite successful, selling 166,849 from 1877 through 1909. Nonetheless, there was some hesitation to move away from the single action mechanism, which had so proven itself. Famous adopters of the Lightning were William “Billy the Kid” Bonney and John Wesley Hardin, along with “Doc” Holliday. Doc’s weapon of choice early in his western career was an 1851 Colt Navy revolver. Later, Doc carried a nickel-plated .41 caliber Colt Thunderer or the .38 caliber Colt Lightning.

The overall condition is near fine. Original blue & case colors. Excellent action. The bore is bright with nice rifling. The grips are faded brown. The right panel has a chip out of the bottom, while the left grip has the initials “KH” scratched in.