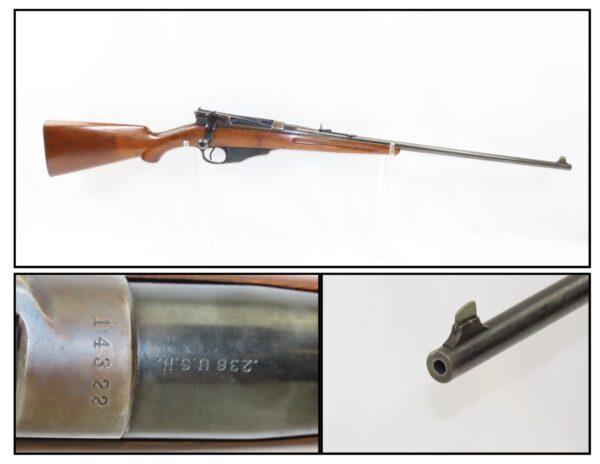 Here we present a C&R Winchester-Lee Model 1895 Straight Pull Bolt Action Rifle, manufactured circa 1899 in New Haven, Connecticut. This example is marked “FROM W.F. SHEARD TACOMA WASH” above the Winchester markings on the receiver. Sheard was a frontier gunsmith in Livingston, Montana Territory (c1884-1895) then in Tacoma, Washington (1895 through the nineteen-teens). He was a fur trader and a dealer of Winchester dealer, and his advertisements list guns, cartridges, steel traps and hunters’ supplies in addition to his buyer and export service for furs. He patented and manufactured his namesake Sheard sights before selling the patents and designs to Marbles. He was also quite the sportsman, being known for selling furs, big game hunting, and professional shooting. His address in Tacoma was 908 & 910 A Street. Interestingly, some stationary of his we observed also noted that he was a “COLLECTOR OF GAME HEADS AND INDIAN CURIOS”.

The Lee was the design of James Paris Lee, formerly of Remington. The Lee Rifle competed in the 1894 Navy trials for a rifle for both the Navy and Marine Corps and won, being adopted as the Model 1895. Heretofore, the U.S. military had almost exclusively been using large bore, single-shot rifles with single action hammers, but times were changing. The Army picked the Krag-Jorgensen which proved to be the first successful bolt action, small bore rifle in U.S. military service, so it made sense that the Navy would want something to update from their Remington Rolling Block Rifles. The Winchester-Lee would not see nearly the numbers the Krag did due to manufacturing issues at Winchester. The Navy began additionally purchasing Krags in about 1900. Only about 20,000 were made altogether, with only about 1,700 of those being the Sporting Model.

The overall condition is very good. The steel surfaces have been re-blued. The action is strong. Bright bore with very nice rifling. The walnut stock is solid with a nice smooth finish. This example has a unique silver coin front sight blade replacement. This is a neat piece from the last year of the 19th Century that was sold by one of the last American Frontier outfitters.