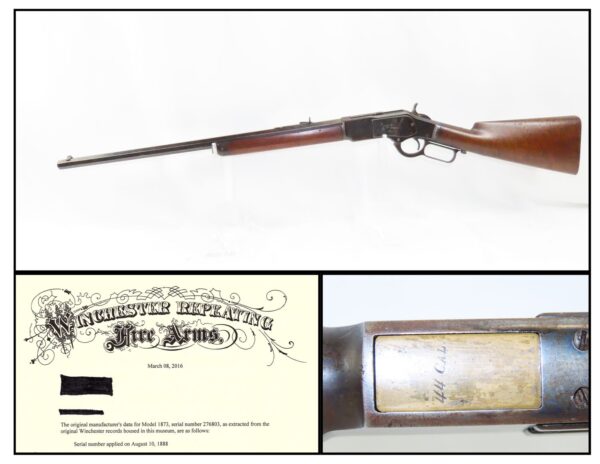 Here we present an antique Lettered, Special Order Winchester Model 1873 Lever Action Rifle chambered in .44-40 WCF, made in 1888 in New Haven, Connecticut. This one features an octagonal barrel, half-length magazine, and shotgun type of butt stock and plate. These features are a desirable combination, not just because they make a scarce variation of the Model 1873 Winchester, but because of how if affects the ergonomics and weight distribution of the rifle.

The Model 1873 is one of the most iconic of American rifles. Given the moniker “The Gun that Won the West”, the 1873 was there during the Indian Wars and Range Wars of the late 19th century. Cowboys, Natives, settlers, miners, law enforcement, express companies and hunters all found these rifles and carbines useful tools. These rifles made excellent companions to revolvers at the time as they were chambered for the same ammunition, meaning that the user only had to keep one type to feed both guns.

One could easily defend the homestead and provide for his family with this versatile weapon. The 1873 really was the quintessential Western rifle, handily outpacing all the muzzle-loading and Civil War surplus guns that also made their way to the frontier. Still an icon in the modern day, it was manufactured between 1873 and 1923. It was originally chambered for the .44-40 cartridge, which was the first centerfire cartridge, and which became immensely popular. The 1873 was later produced in .38-40, .32-20, and .22. The Model 1873 was produced in three variations: a 24-inch barrel rifle, a 20-inch barrel carbine, and a “musket”, which was aimed at military contracts and only made up less than 5% of production. In all, over 720,000 Model 1873s were produced.

The overall condition is near fine. Original blue, case colors (mostly on the hammer), and patina. Strong, tight action. Bright bore with strong rifling. The walnut stock is stable and has a nice grain.