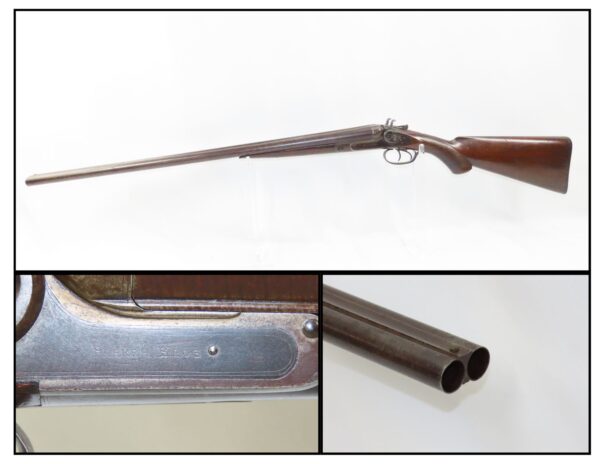 Classic American Made Shotgun from 1887!

Here we present an antique Parker Brothers Grade 0 Double Barrel 12 Gauge Hammer Shotgun, made in 1887 in Meriden, Connecticut. Charles Parker was an entrepreneur who began working in U.S. manufacturing in the 1830s. Interestingly, one of his first products was a coffee mill. He also collaborated on several government contracts to make arms during the American Civil War, including one for the Model 1861 and then a truly interesting, rare breech-loading design for the state of Kentucky, called the Triplett & Scott Carbine. Finally, in 1866, after his experience in arms manufacture for the war effort, he and his sons, Wilbur and Dexter, began the company Parker Brothers, making sporting shotguns. This company is considered by many to have been the best manufacturer of fine American shotguns, ever. The company was in business until 1942.

The Parker Grade 0 was introduced in 1869. Parker started its grade numbering system at zero to denote their lowest grade made at that time. As Parker introduced the named grades, they named Grade 0 guns R, S, T, U and VH. Except for the VH which describes all Grade 0 hammerless Parkers, the other names describe Grade 0 hammer guns based on various gauge and stock configurations. In 1899 the hammerless grade 0, the VH, was introduced and it used Vulcan steel barrels. The grade 0 was the mainstay of Parker production and the fit and finish was excellent. They have little extra finish in the way of checkering or engraving and the wood used was plain, straight grain American walnut. The engraving was a simple border around the frame. The early guns had plain metal butt plates and later ones have hard rubber dogs head butt plates. The frame, fore end iron and locks were casehardened.

The overall condition is very good. Original Damascus twist pattern on the barrels, and good plum patina throughout. The barrels face nicely. Crisp actions. Bright, smooth bore which is slightly frosted: certainly serviceable. There is a ding on the left barrel about 3 inches behind the muzzle. The left hammer screw is a functional replacement and the front sight bead has been replaced long ago with an ad hoc screw. The walnut stock is solid all around and in good shape. Numbers match on the trigger guard, barrels, watertable, and forearm iron. A good example of a well-made but simple Parker shotgun!