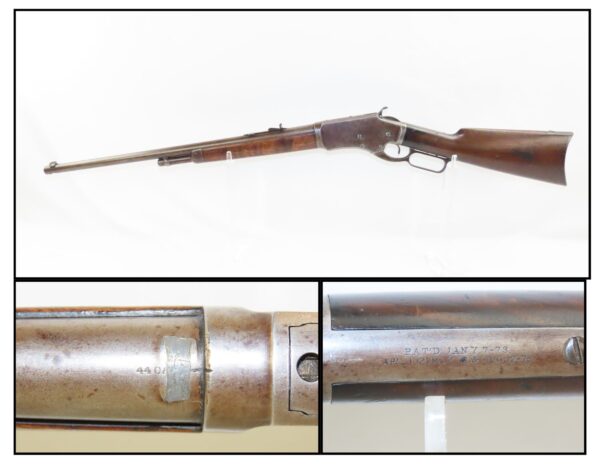 Here we present an antique Whitney Kennedy Lever Action Rifle in .44-40 WCF, made circa the mid-1880s at the Whitneyville Armory in New Haven, Connecticut. The Whitney Kennedy was the next iteration of the Whitney Burgess Rifle. Production was short-lived with only about 15,000 of all variants from 1879-1886. Obviously, Winchester was the top choice for most in the lever gun market during this period with over 222,937 Winchester Model 1873s having been made by the end of 1886.

The “Burgess” serpentine style of lever was used until 1883. With the more traditional style of lever used here, that would date this one being manufactured between 1884-1886. The serial number is R493. The last alpha prefix used was “S”, so we are in the middle to end of the pack. It comes with a 23-3/4 inch round barrel chambered in the venerable .44-40 WCF. Just like the Winchester 1873, this rifle would have been a great companion to a Colt or Merwin Hulbert revolver in the same caliber.

The overall condition is very good. This example sports a solid walnut stock. The action is strong, smooth, and crisp. The bore is bright with nice rifling throughout. Original finish. The magazine was shortened to 14 inches at some point. There was also another dovetail behind the rear sight that was eventually filled in. Here is a great and distinctive lever action rifle that would have been a trusty alternative to the Winchester of the day!