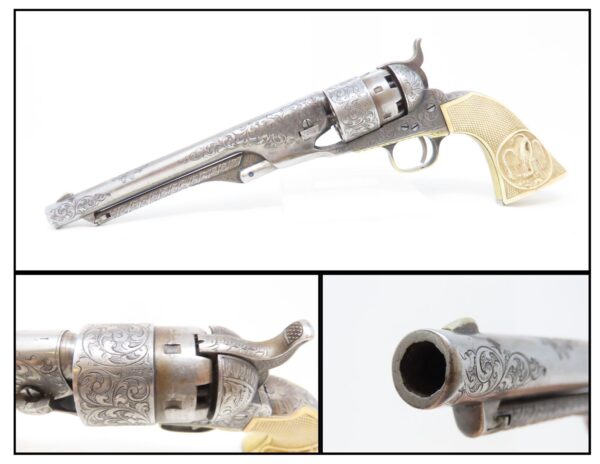 Here we present an antique Colt Model 1860 Army Percussion Revolver, made in 1866 in Hartford, Connecticut. The 1860 Army was the single most used pistol of the American Civil War. Over 200,000 were made from 1860 to 1873, and 156,000 of those were made by the end of the war in 1865. These were excellent sidearms for officers, cavalry, infantry, and artillery troops. The 1860 Army was Samuel Colt’s finest achievement to that point, having finally developed a large caliber revolver that weighed about 2 lbs. 10 oz. to the famous Dragoon’s 4 lbs. 4 oz., and was adopted en masse by the U.S. government with huge contracts. The revolver was well balanced in hand and had a long enough barrel to be effective when utilized as a carbine with the attachable shoulder stock. This revolver represented unprecedented firepower from a handgun in the field at the time and was especially suited to Cavalry. The Confederacy, lacking in manufacturing capabilities though they were, managed to produce limited numbers of copies, and battlefield pickups of the 1860 Army were highly coveted. The 1860 Army went on to serve the U.S. military even after the Civil War and into the Indian Wars, until production of Colt’s 1873 Single Action Army created new waves in the revolver market, and again achieved great success in the military and commercial markets.

This revolver was beautifully engraved in the fashion of Gustave Young’s shop sometime after it left the factory. Each side of the hammer features the wolf’s head motif. The rest of the gun is covered with profuse scroll engraving. This was a commercial model, so it lacks the cutouts for the detachable shoulder stock. The Coat of Arms of Mexico on the grip depicts a Mexican (golden) eagle perched on a prickly pear cactus with a rattlesnake in its beak. The design is rooted in the legend that the Aztec people would know where to build their city once they saw an eagle eating a snake on top of a lake. The image has been an important symbol of Mexican politics and culture for centuries. To the people of Tenochtitlan (Mexico City), this symbol had strong religious connotations, and to the Europeans, it came to symbolize the triumph of good over evil, with the snake sometimes representative of the serpent in the Garden of Eden.

The overall condition is nearing fine. Excellent action. Bright bore with sharp rifling. There is some edge wear on the left side of the muzzle from holstering and re-holstering many times. This example sports a wonderful antique ivory grip. There is a sliver missing along the right side of the backstrap and the edge is no longer sharp as it would have been newly broken off, rather, it is smooth with much handling since. Sharp floral engravings, even the loading lever has almost 100% coverage. Numbers match. A gorgeous gun from the post-Civil War period and the hay-day of the Wild West!