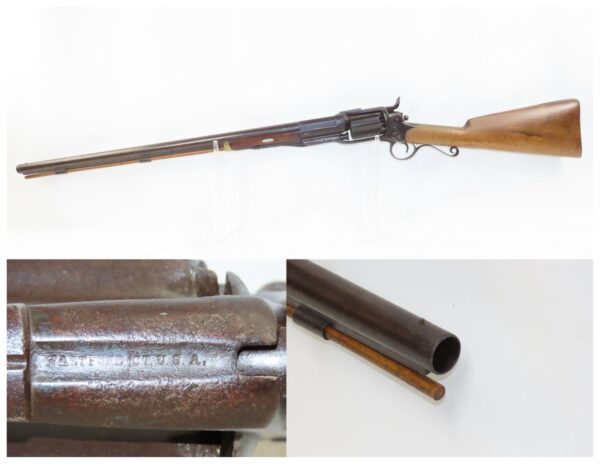 Here we present an antique Colt Model 1855 Half Stock Side Hammer Revolving Shotgun, manufactured circa 1863 with a production run of 1860 through 1863 in Hartford, Connecticut. Estimated production of the 10-gauge examples is 550 with a total production including the 20-gauge models of approximately 1,100. This revolving shotgun very much resembles the Model 1855 Half Stock Sporting Rifle. It came fitted with either a 27”, 30”, 33”, or 36” smoothbore barrel and had a 5-shot cylinder chambered in either .60 Caliber (20-gauge) or .75 Caliber (10 gauge). The hammer and loading lever were case colored with the rest of the metal blued. The stocks were either oil or varnish finished American Walnut. These scarce shotguns have their own serial number range going from #1 through #1100.

This gun was a part of a series of Model 1855 long guns manufactured by Colt that today are highly sought after. Examples of this limited production shotgun are scarce in any condition. These arms were also known as the Colt New Model Revolving Shotguns and are in basic design an enlarged version of the Colt Model 1855 Pocket revolvers.They also go by the nickname “Root” thanks to the involvement of Elisha K. Root, who was instrumental to the early success of the Colt Patent Firearms Manufacturing Company. These are classified by “The Book of Colt Firearms” as “the utmost rarity.”

Use would not have been constrained to so-called “sporting” purposes, especially in wartime. This was a 5-shot repeating shotgun in .75 caliber. Never mind that it is a smoothbore and not a rifle. Many an infantryman or cavalryman was using .69 or .75 caliber single shot muzzle-loaders. Imagine having the ability to load from the front of the cylinder rather than the muzzle! This could have been used with large, .75 caliber ball as well as shot, or a combination of both, known as buck and ball. This would have been a devastating weapon, only surpassed in potential firepower by the advent of the Henry or Spencer. One can well-imagine the owner being the envy of his comrades.

The overall condition is good+. Original patina. The top strap of the frame shows a period repair. The frame above and in front of the cylinder began to separate, so a gunsmith welded a piece of steel over this area to shore it up. We have seen this before and attribute it to this being a rather thin part of the frame combined with a large bore (meaning a large powder charge). The strengthening piece has been grooved in line with the existing groove along the top of the frame. Strong action with the cylinder indexing properly and locking up at each chamber. The smooth bore is good for its age. The butt stock is a replacement and it is solid. The fore end is original. Numbers match. A rare and functioning piece of Colt history!