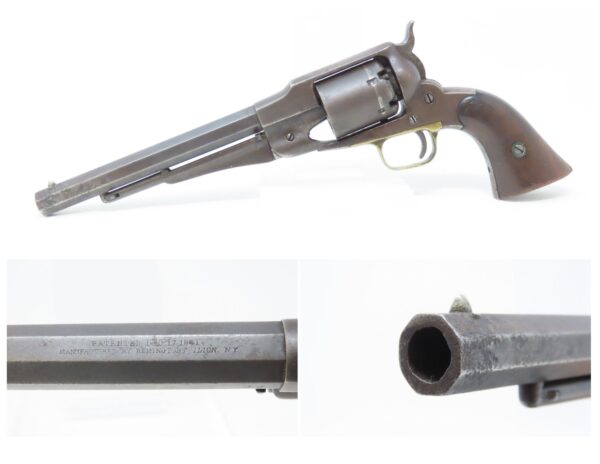 Here we present an antique Remington U.S. Model 1861 “Old Army” Percussion Revolver, used during the American Civil War. This 6-shot .44 caliber revolver was the next evolution for Remington and replaced the earlier Remington-Beals Army revolver. Approximately 6,000 were produced before transitioning over to the New Model 1863, which was the result of numerous incremental improvements suggested by the Army Ordnance Department.

Remington, like Colt, was in business of arms making long prior to the Civil War. Remington began producing handguns since 1857 when they introduced the Remington-Beals Pocket Revolver. With the outbreak of the Civil War, all of the company’s energy was devoted to the military production of both long arms and handguns.

As mentioned above, the Model 1861 Old Army revolver was produced to the tune of 6,000 examples, while the New Army model saw totals of about 135,000. Overall, both the Old Army and New Army were highly touted as a reliable and effective firearm, not only for its day, but also in today’s collector market, making her as popular today as she was when she came out over 160 years ago. As Norm Flayderman said in his book, these guns were used hard and “show heavy wear”. Better condition specimens scarce.” This is certainly one of those better condition pieces.

The overall condition is good+. Original patina. Strong action (the cylinder is just a hair off if the hammer is cocked slow but will index if cocked with vigor). The bore is well-rifled with an aged patina. Numbers match. The arbor pin is a period ad hoc replacement. Both grips are in good shape with an average amount of handling wear. There is a faint cartouche on the left grip. Markings are sharp. The barrel and frame are both marked “JJ” on the left side and a single “B” and “J” on the cylinder.