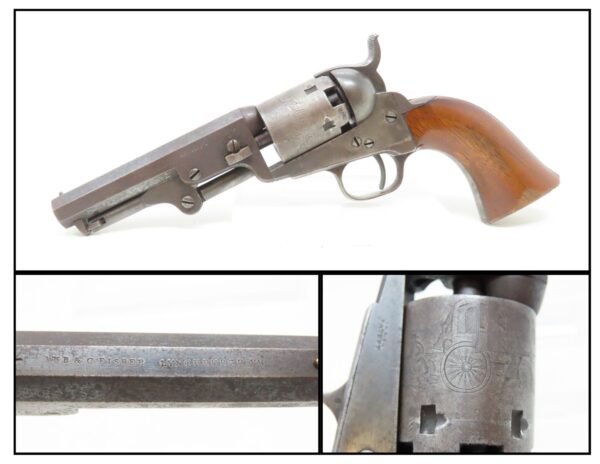 Here we present an antique Colt Model 1849 Pocket Revolver, made in 1856 in Hartford, Connecticut & Sold by William B. & Cyrus Fisher of Lynchburgh, Virginia. The top of the barrel flat is stamped “WM B. & C FISHER LYNCHBURGH VA”. William and Cyrus Fisher were gunmakers and dealers in their Lynchburgh Gun & Pistol Emporium prior to the war. They are also known to have performed work converting 1795 and 1816 Flintlocks to percussion arms for the Confederacy in Virginia armories during the American Civil War. They also imported and sold weapons from Europe during the war. We have yet to see another so marked! Very rare.

The Model 1849 Pocket, the replacement for the Baby Dragoon, was the most widely produced of any Colt percussion pistol. Nearly 340,000 were manufactured during its 23-year production run that ended in 1873. Over 280,000 of these were produced by Colt’s factory at Hartford by the end of the American Civil War in 1865. These were very popular and saw a lot of use on the battlefield, on the home front and in the West. These were some of the smallest, handiest pocket revolvers of the time.

The overall condition is fine. Original blue finish/patina. Nice bore. Very nice walnut grip with less than expected wear. The action (hammer/trigger) is strong though the cylinder does not index. This is because the hand has been removed. Our suspicion is that this was done by a previous collector so that the cylinder would not be worn: either the ratchet on the back of the cylinder or with a drag line from the cylinder bolt. This gun has aged very well. The safety pins on the back of the cylinder are still intact as well. Numbers match. The stagecoach robbery cylinder scene is intact. “WM B&C FISHER LYNCHBURGH VA” is stamped atop the barrel. A beautiful Colt 1849 Pocket with an Antebellum Southern origin!