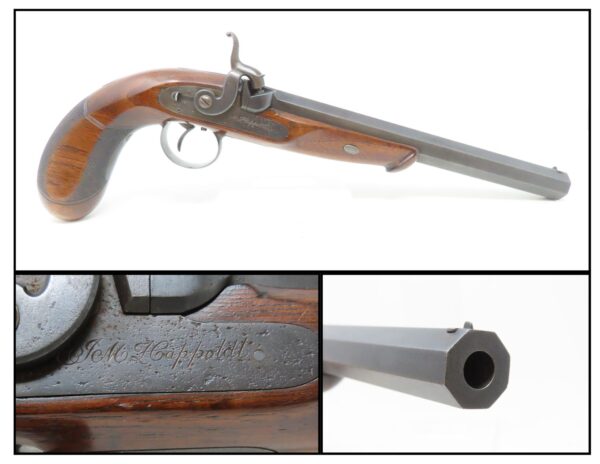 Here we present an antique John M. Happoldt Percussion Pistol, made circa 1855 in Charleston, South Carolina. The 1830 Census reveals that the 27-year-old John M. Happoldt Sr. was established as a gunmaker, working under the name of J.M. Happoldt & Sons, in Charleston, South Carolina, working at 45 State Street, which was also his home. He spent the next three decades becoming one of the leading gunmakers of the region, producing high quality rifles and pistols.

Although all three of his sons are listed as gunsmiths in the 1850 Census. John H. Happoldt Jr. officially partnered with his father around 1852 and went out on his own around 1855. Thus, the marking on the lock of this pistol suggests that it was produced during the period after 1855. He was also known to do arms alteration work for the state of South Carolina and the newly formed Confederacy, with the work ranging from repairing guns, altering them from flint to percussion, “cleaning & rifling” Model 1842 muskets and altering M1841 “Mississippi” Rifles to accept saber bayonets.

The bore of the pistol is .44 caliber, and the pistol is smoothbore, conforming with the Code Duello requirements that dueling pistols not have rifled bores. Despite the fact that dueling was illegal in most locations in the United States by the 1850s, it was still a regular practice in South Carolina as late as the 1880s! South Carolina actually had its own set of local rules and regulations that were applied to duels.

This pistol has the traits specific to a Happoldt pistol to include the unique stock with the flat sides, checkered front and back on the grip, and Schnabel fore end, with an octagonal barrel of smooth bore. Very few of these pistols are known. This one also has a single set trigger that is adjustable and works well. The sights are small and fine with the front being in a dovetail. There is a half-cock safety bar behind the hammer. The lock is marked “JM Happoldt”.

The overall condition is very good. Refinished. Excellent action. Bright bore. Fine stock with sharp checkering. Clear markings. This is a large, stout, well-made pistol that would have been worn on the belt, a pommel holster, used for target sport, or kept in reserve to sort out matters of honor.