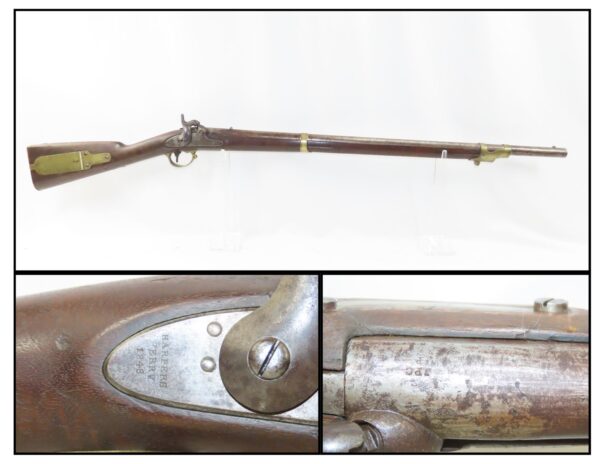 Here we present an antique Harpers Ferry U.S. Model 1841 Mississippi Rifle manufactured circa 1848 in Harpers Ferry, Virginia. Design work on the Model 1841 began in 1840. The result was a hefty 9-pound rifle chambered for the .54 round ball. The Harpers Ferry Arsenal had just completed production of the Hall Rifle when it took on the 1841. Production continued from 1941 until 1861, with over 25,000 produced by 1855 alone. It was adopted by the U.S. Army forces and became the first standard production percussion rifle. As mentioned, it was originally chambered in .54, and in 1855 many of these rifles underwent a modification to chamber the .58 Minie ball. The .58 Minie became the standard for the Army and many existing model 1841s were reworked to support it.

First use of the Model 1841 was during the Seminole Wars (1816-1858) between the United States Army and the Seminole tribes in Florida. The rifle earned it name of “Mississippi Rifle” during the Mexican American War (1846-48) under the banner of the 1st Mississippi Volunteer Regiment headed by Jefferson Davis. Davis got the untested rifle-musket into the hands of his men and was a deciding factor during the Battle of Buena Vista against Santa Anna’s forces. The battle was a decisive victory by the 4,594 Americans over a much larger Mexican Army of 15,000+ strong.

Like many mid-century guns, the Model 1841 remained in use, in sizeable numbers, by the time of the American Civil War. Like the South, the Federal forces also carried this model into combat due to shortages on both sides when the fighting began. Even at this time, it was still called by its nickname “Mississippi Rifle”. This example was never modified to the .58 Minie, which strengthens the likelihood that this was a Confederate used rifle.

The overall condition is good. Strong action. Bright bore. Nice walnut stock with an expected amount of wear, no major damage. The ramrod is absent. “DS” is carved into the left buttstock. “1848” dated lock. The number “5” is stamped on the left side plate.