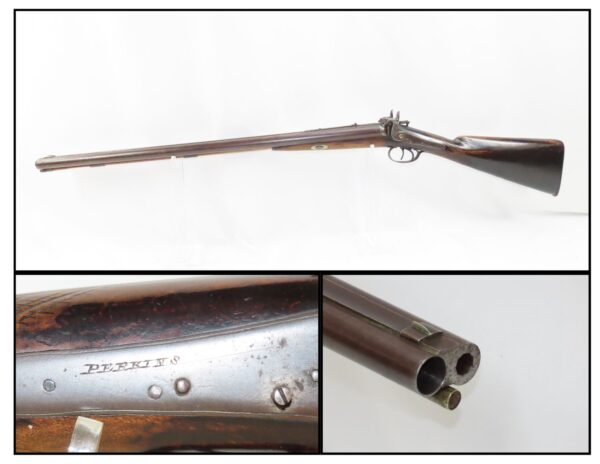 Here we present an antique English Percussion Cape Gun, made by a British gunmaker named Perkins, in Birmingham, England. Perkins was an active gunmaker under his own name between at least the years of 1837 and 1841.

These were typically high-end hunting weapons that featured a side by side configuration with one barrel rifled and the other smooth. The hunter would use the rifled barrel to fire long range, precise shots against large game and use the smooth could be loaded with a large ball or slug for a quick follow up shot, especially on large and dangerous game, or the smooth bore could be loaded with shot to make it feasible to hunt fowl at the same time without carrying multiple guns. The gun has two triggers to allow either barrel as needed.

Cape guns made in Germany, Belgium, and Austria usually have the rifled barrel on the right side, while British made cape guns are usually reversed. These were supremely handy firearms that could also be used to defend the homestead or put game on the table.

The overall condition is very good. Strong actions. Good bores with sharp rifling in the rifled bore. There is both a tang-mounted peep sight that flips up or down as well as a barrel mounted rear sight with a small notch. The stock is solid. Birmingham proofs. A great piece of hunting hardware from the mid-19th Century!