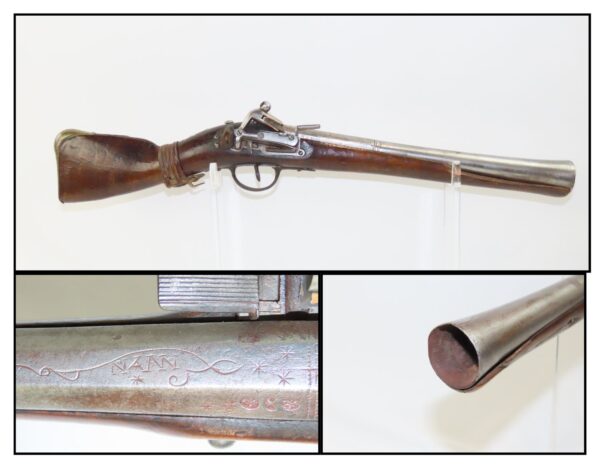 Here we present an antique Ornate Ottoman Style Flintlock Blunderbuss Dag/Knee Pistol, made circa 1800. The blunderbuss is a firearm with a short, large caliber barrel flared at the muzzle and frequently throughout the entire bore and used with shot and other projectiles. The blunderbuss is commonly considered to be an early predecessor of the modern day shotgun, with similar military and defensive use. It was effective only at short range, lacking accuracy at long range. A blunderbuss in handgun form was called a Dragon, and it is from this that the term “Dragoon” evolved. The flintlock blunderbuss was the original coach gun, being a short, handy and devastating weapon at close range. It was used in many capacities, not the least of which were for naval boarding or defending vessels.

The miquelet was an early and sturdy form of flintlock popular throughout Europe and the Ottoman Empire from the seventeenth into the early twentieth century A “Miquelet” is a type of flintlock developed in Spain. It is a distinctive form of snaplock, originally as a flint-against-steel ignition form, once prevalent in Spain, Portugal, Ital, the Balkans, North Africa and the Ottoman Empire from the late 16th to the mid-19th centuries. The miquelet lock, with its combined battery and pan cover was the final innovative link that made the flintlock mechanism possible. It proved to be both the precursor and companion to what we now call the “true” flintlock.

The overall condition is very good. The action is strong and tight—it will spark! The bore is in good shape for its age. The stock is solid overall with some of the fore stock lost long ago as evidenced by the area being smooth and patinated like the rest of the wood. Light engravings are present on the barrel top and what appears to be “NANN” can be read. Proof style markings are located on the left side of the barrel. This example sports leather thongs wrapped around the wrist and tacked into the rear of the mainspring/cock in what appears to be some sort of protective measure. This is a very neat, historical piece that would have been appreciated by pirates!