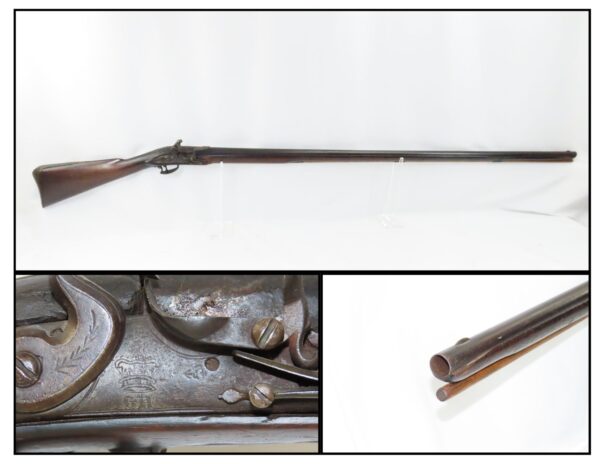 Here we present an antique British-Colonial Flintlock Musket with a Lock by Richard Edge, made circa 1762. This is a very long musket, measuring 5 feet 8 inches from end to end with a 53 inch barrel that would have been an infantry type weapon for irregular or militia troops during this period. This piece is a composite that was typical of American colonial arms of the period. The lock was made during the French & Indian War by Richard Edge in 1762, warranted by the Board of Ordnance. Edge was based out of Wednesbury and Birmingham, and was partnered with William Grice for a time, as well as his own son (Edge & Son). The barrel’s exterior is worn and dark and there is a single circular proof mark on the top left of the breech. The barrel is pinned, and the musket is furnished in brass with butt plate, trigger guard, and ramrod tubes. The trigger guard has been repaired in an ad hoc or expedient sort of way. This is a fascinating piece that represents the type of weapon used by many colonials during the Revolutionary War from 1775-1783.

The overall condition is good. The metal surfaces are dark with age. The action remains strong. The bore is smooth and dim. The stock is dark and has seen some repairs around the lock. These repairs are stable. It looks as though one is very old and one is later but not recent.