‹ Back to the shop
View cart “Black Powder Frame COLT SAA Peacemaker in .45 Antique Single Action Army Made in 1892” has been added to your cart. 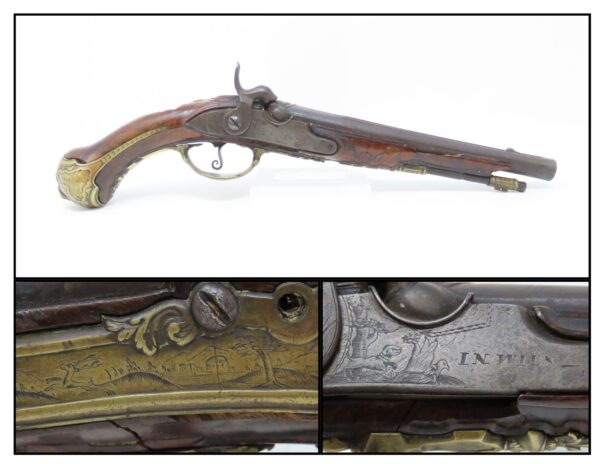 Here we present an antique European Johan Was Belt Pistol, made circa 1710 in Vienna, Austria. Like the cavalry pistols from other nations such as Britain and France, this was a large, single shot pistol with a brass pommel that could be used as a club when the man-stopping single shot was expended. This could have likely been purchased privately by an officer and carried into battle. Originally a flintlock, this one stayed in use through the advent of the percussion firing system and was likely converted circa the 1840s.

The engravings set this one apart. An armor clad knight stands with his hand on his sword on the trigger guard. Each side of the pommel (pastoral scene), the sideplate (running stag), and the lock (dog & bird) are engraved with thin strokes in a primitive manner. The top of the barrel and the tail of the lock are marked for Iohan Was and the front of the lock is marked “IN WIEN” (Vienna). It is clear that this pistol has been through the war. The stock has a lovely grain. This is a handsome piece that still maintains a lot of aesthetic appeal.

The overall description is fair. Action does not function. Good bore. The stock is solid despite significant damage under the lock and near the muzzle. The thumb plate is absent. This is a handsome piece and a rare opportunity to own a piece of history over 300 years old.