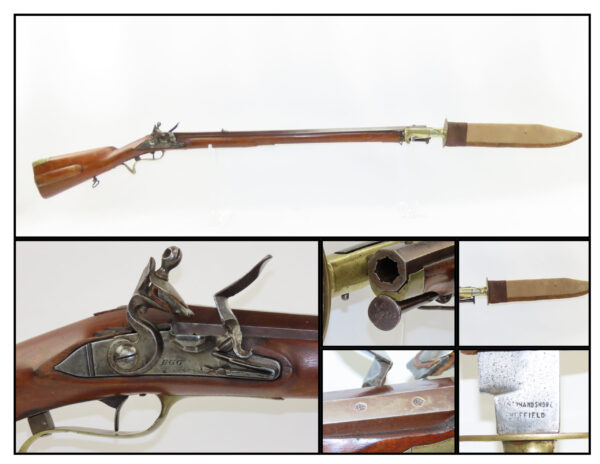 Here we present an antique British Flintlock Jaeger Rifle by Durs Egg, made circa the late-18th Century in London, England. Durs Egg (1748-1831) was a Swiss-born British gunmaker, known for high quality flintlock firearms. He was born in Basle, Switzerland and apprenticed in Solothurn before working in Paris and finally establishing his business in London in 1772. Egg was not simply a maker, but an innovator and inventor who held multiple patents. He was active in pioneering rifles and early breechloaders for military applications, such as being a maker of the Ferguson rifle.

Up to this point, the British military had used smooth bored muskets almost exclusively for their infantry. However, times changed, and the Board of Ordnance was once again looking for a suitable rifle to field. This would prove to be a transitionary period for military arms, though the transition would take decades. Cues for experimental rifles were taken primarily from central Europe, namely what we now consider Germany, as use of the rifle there proved highly effective. Specifically, units of German rifle units were established from men who were typically experienced hunters, who already had accurate personal weapons and who could use them with expertise. These were no conscripts who barely knew how to load their muskets, but rather those who were proficient before any military training and who would also have been skilled in the areas of tracking and scouting. The rifles were distinct in their form, function and aesthetic. They were typically relatively short, with full-length stocks, octagonal barrels, a sliding wooden patch box on one side with a generous cheek rest on the other, and sling swivels. As a result, the British produced rather Germanic-looking rifles. These were short overall and had smaller bores (.60-.70 caliber) and 7-groove rifling. This piece meets all that criteria, is well-balanced, and has the addition of a large bayonet lug on the right side. The rear sight has a stationary notch sight with a hinged flip-up longer distance leaf. The ramrod is of iron with a wide, flat end for lots of surface area to ram the ball down the rifling. The small end of the ramrod is able to accept several different attachments, such as a worm, which are stored in the patch box along with some old patches. The butt plate, trigger guard, side plate, and muzzle cap are of brass. The left side of the barrel has 1740-style proofs with crown “V” and crown “CP” in sunken ovals. The bayonet in this instance is a large “Bowie” type, with a long clip-point, brass hilt with a shield-shaped German silver ornament, and spring-loaded, button-type release. The blade is marked “[F]ENTONANDSHORE/SHEFFIELD”.

Rifles such as these were utilized during the Revolutionary War by some of the Hessian troops that fought on behalf of the British. British regulars were surprised to see these foreign troops with rifles equipped with bayonets. Whether this rifle was used during the conflict with the colonists or not, by the time of the Napoleonic Wars, other such rifles were in use by corps of British riflemen. They were not adopted on a mass scale, but the concept could not be overlooked. This rifle may have been a one-off trial or custom order, or it could have been part of a small order for some volunteers. The blade seems to be later than the rifle and it is likely that the original bayonet was lost and a new one was custom fashioned with the Bowie, which was just becoming fashionable. While it does add significant weight to the front of the rifle, it would have been a much more useful, all-around tool than a simple spike. A very fitting tool for a special unit rifleman.

The overall condition is near fine. The action is excellent. The bore is bright and clean. The barrel has a browned finish. There are a few stable cracks along the grain toward the muzzle, otherwise the stock is smooth and solid. This is a one of a kind Jaeger by Egg with an impressive Bowie bayonet!