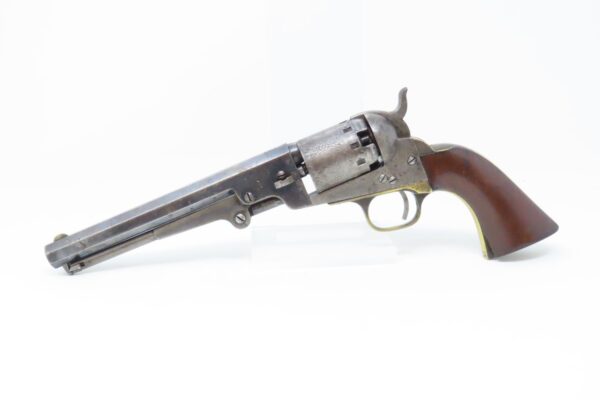 Here we present an antique British Proofed Manhattan Arms Fourth Series Percussion Pocket Revolver, made circa 1864-67 in Newark, New Jersey with roughly 9,000 of these 4th Series made. Manhattan Fire Arms Co. was founded in 1856 specifically to capitalize on the soon to be expiring Colt patents in 1857. This strategy worked very well for the company and they began by making high quality and very close copies of both Colts and other popular pistols with expired patents. These revolvers greatly resemble the Colt Model 1849 Pocket and 1851 Navy revolvers. In fact, Manhattan’s copies of Colts were so close that Colt tried to kill their production with a lawsuit, even though their patent had expired. There were roughly 80,000 total revolvers made throughout the production run of Series One through Series Five.

Manhattan’s revolvers were very well received by the public. The company never received U.S. military contracts, except for a small delivery, most likely on the regimental level. Nevertheless, many Manhattan revolvers found themselves on smoky Civil War battlefields, purchased privately by officers and soldiers, and they were certainly in use at home. The war created a vast and unquenchable market for firearms of all types.

This one features British proof (Birmingham) marks over each of the chambers on the cylinder as well as the bottom-left barrel flat (7:30 clock position if looking from back to front). This is the only British proofed Manhattan we have seen. This revolver remains in fantastic condition with its cylinder scenes and lots of finish but it has obviously seen use.

The overall condition is fine. Lots of blue, silver, and case colors remain. The action is strong and tight. The bore is bright and reflective. The cylinder scenes are in fantastic shape, remaining legible. The numbers match! The grip is solid with a small chip out of the front left panel. Here is a fantastic example of a Colt competitor that is most known in the US from around the time of the American Civil War but apparently earned its chops across the pond!