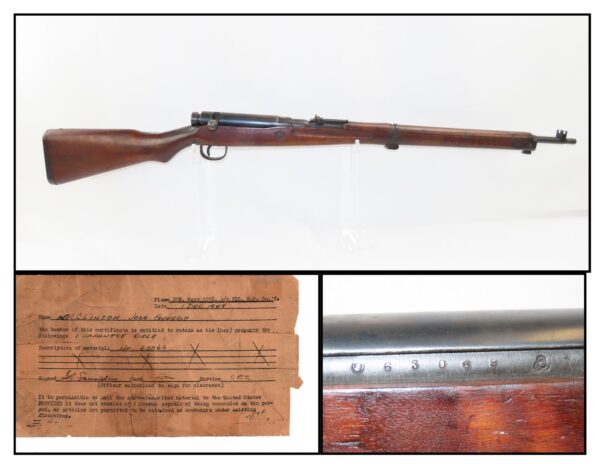 Here we present a Japanese Kokura Type 99 Arisaka Military Rifle manufactured circa 1943 at the Kokura Arsenal in Kokura, Japan. The Type 99 was one of the standard bolt-action combat rifles to be used by the Japanese Empire during World War II. At the start of its production, it proved a reliable and robust rifle. But, the closing noose of the Pacific Theater soon brought about dramatic changes in its production methods, often leading to a subclass weapon. The Type 99 had several variants that included the Short Rifle, Long Rifle, an airborne variant and a dedicated sniper model. Production lasted from 1939 into 1945 before ending with Japan’s surrender.

The arsenal was established in 1916 as the Kokura Arms Factory and was one of six arsenals under the control of the government. Interestingly, this arsenal was the backup target of the US’s first atomic bomb and the main target of the second. However, the arsenal could not be bombed due to it being obscured by smoke and clouds from firebombing missions, so the US ended up bombing Nagasaki instead. Shortly after the Japanese surrender, the majority of the Japanese arsenals were forced to close and sequestered by the American forces.

This example includes December 1, 1945 dated capture paper, listing the rifle by serial number as well as the bearer and the signing officer.

The overall condition is very good. Original blue. The action is strong and smooth. The chrome lined bore is bright with nice rifling. The visible markings are legible, although the mum has been ground. Here is a solid and unique rifle for the WWII collection!