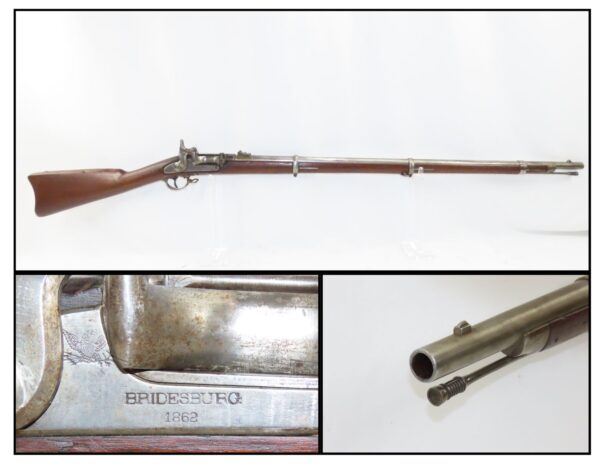 Like Those Used by the FENIAN BROTHRHOOD INVASION of Canada

Here we present an antique Alfred Jenks & Son Model 1861/63 Needham Conversion of a U.S. Civil War Bridesburg Contract Rifle Musket representing a fascinating series of events in world history. Bridesburg Rifle-Muskets were purchased as surplus just after the American Civil War by a secret Irish-American society calling themselves the Fenian Brotherhood. The Brotherhood plotted to invade and take over Canada (a British commonwealth) in order to negotiate the independence of Ireland from Britain.

The first attack happened in June 1866 just over the border from Niagara, New York. The attack involved 600 Fenians against a column of Canadian Volunteers, and the attack was successful. However, upon retreat back to the U.S. they were arrested, and the guns confiscated. A short time later, the guns were released back to the group via political connections and a second attack was plotted. The Rifle Muskets were quite obsolete by this time, so the Brotherhood updated them using the patent of J&G Needham of England. The work was done in a shop in Trenton, New Jersey to about 5,000 rifles in 1869. This time the invasion was through Vermont in May of 1870 and involved 200 Fenians. This attack failed and resulted in their capture, ending a little-known chapter in world history.

This breech-loading rifle is chambered for the .58 centerfire cartridge, and is Civil War dated on the lock “1862”, along with “BRIDESBURG” and a federal eagle.

The overall condition is very good. Strong action all around. Bright, rifled bore. Solid stock. “1862” is dated on the lock. “US” stamped on the buttplate tang. Here is an exceptional example with history from the American Civil War.