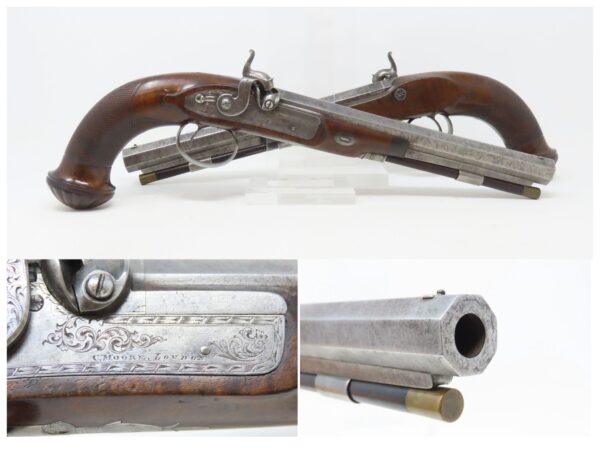 Here we present two antique British Charles J. Moore Percussion Officer’s Pistols, made circa the early 1830s in London, England. Moore began work in London in 1823 and between 1825 and 1842 he worked at 77 St. James Street, where these pistols were made. His patent (as seen marked on these guns) was for an early attempt at his own percussion firing system. Ultimately, his system was made obsolete. Some of these guns were converted to what would become the standard percussion system. He also had two retail stores in Paris, which was unusual for a London gunmaker. Moore’s royal contracts included being Furbisher to St. James’s Palace and Hampton Court in 1829 and Gunmaker-in-Ordinary to William IV in 1836. In 1843, Moore began a partnership with James Woodward, who had apprenticed with and then worked for him starting in 1827. The firm became Moore & Woodward and moved to 64 St. James’s Street. An original sales receipt from Charles Moore’s store states that on April 13, 1835, a pair of dueling pistols, serial number 1821, were sold, making these, serial number 1163, prior to that date.

These pistols are large and of martial size for the likes of a military officer or anyone who could use and afford such a set of weapons. These could also have been used to settle matters of honor as in a duel. These feature 9 ¼ inch octagonal barrels with a smooth bore in .48 caliber, both front and rear sights (not a given in this day), engraved hardware, and walnut stocks with carved pommels. The top of the barrels are marked “C. MOORE LONDON PATENT” in the golden cartouche. The top of the barrel lists Moore’s London address at that time.

The overall condition of both pistols is very good. Excellent actions. Both bores are in good shape, remain clear, and have dimmed. The stocks/grips are in good shape with average wear and sharp checkering. Visible lettering is crisp and legible. Sharply engraved lock, barrel top and hammer with traditional floral designs.