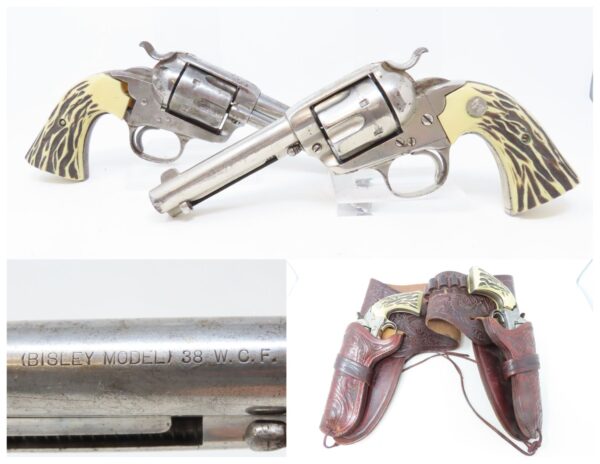 Here we present a Brace of C&R Colt Bisley Model Single Action Army Revolvers in .38-40 Winchester Center Fire, manufactured in Hartford, Connecticut in 1902 and 1906. These are a very nice brace of the Bisley variant of the Colt Single Action Army revolver. The primary differences were a lower hammer spur and a more curvaceous grip frame. These were optimized toward target shooting but many general users and shooters who were not simply target shooters preferred them as well.

These revolvers are finished in nickel and have Franzite grips made to look akin to stag. The holster rig is hand-tooled with a floral motif and single loop holsters. The belt includes 18 cartridge loops. Size is about 39 inches from the prong to the last hole on the other side. 20th Century. A great rig to display these guns or maybe even to put on!

Though Colt enjoyed the largest contracts of any handgun maker during the American Civil War, it had to rely on its array of percussion fired revolvers, namely the 1860 Army until the Smith & Wesson owned Rollin White Patent expired in 1869. This enabled them to begin making revolvers with completely bored through cylinder chambers in order to utilize modern metallic cartridge ammunition in the most effective manner. In 1869, Colt’s began development of a suitable cartridge revolver in earnest, first coming out with a number of conversions for their percussion lines, until 1872 when they debuted what was to become the Colt Model 1873 Single Action Army in the 1872 U.S. Trials. Needless to say, it won, and became the Army’s revolver of choice. It also became the sidearm of choice for many others like cowboys, guards, lawmen, crooks, shopkeepers and all manner of civilians.

Revolver with serial number 285278: old replated nickel finish. The numbers match. The bore is dim with thin rifling visible. The grips are in good shape—a slight bit gappy as they relate to the frame. Revolver with serial number 233014: original finish. The numbers match. The bore is in good condition with nice rifling. The grips are very similar to the other gun but a little gappier at the frame (this seems to be a theme in our experience with this material). The actions are excellent with all 4 clicks and strong safety and half-cock notches. The holster rig is in great shape and the size is approximately 34”-38” (from the first and last hold to the base of the prong).