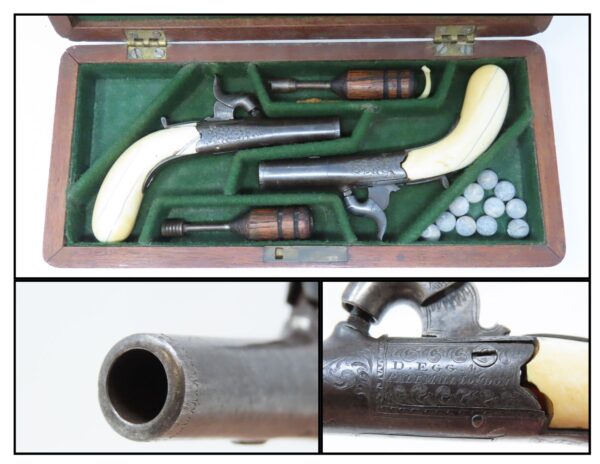 Here we present an antique Pair of British Percussion Pistols by Durs Egg of London, made circa the 1840s. Egg was one of London’s best gunmakers. He was an immigrant from the continent, originally from Solothurn, Switzerland before continuing his training in Paris. He went to London in the early 1770s where he set up the business that would be carried on by his sons and their sons long after his death. Durs Egg was considered a trendsetter for fine arms in his day and his works are highly desirable today.

These pieces by Egg would have been very good sidearms for self-defense in the tumultuous streets of early-19th Century London. They feature fine scroll engraving, antique ivory grips, and utilize the percussion firing system. The left side reads “D. EGG / PALL MALL LONDON”. These are very handsome little single shot pistols.

The overall condition is very good. Both examples have a strong action. Good bores. Beautiful antique ivory grips are firm. Sharp legible engravings. The case includes a nipple wrench, ramrod, needle, and lead balls. Here is a handsome set of defensive pistols from the mid-19th Century in London.