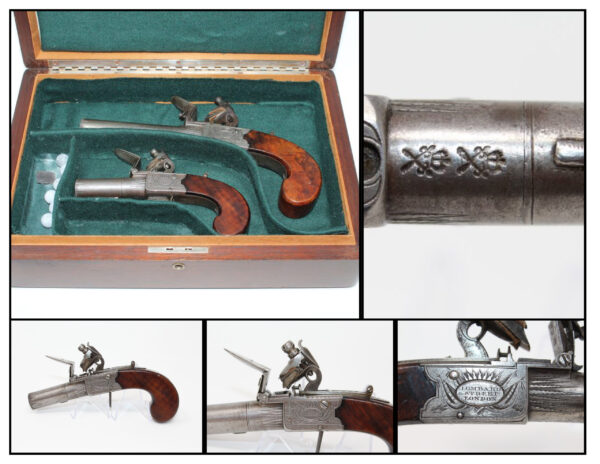 Here we present Two Antique Cased W. Bond Flintlock Pistols, made circa 1830 in London, England. A large family of English Gunsmith’s named Bond had premises at various London addresses including at 108 Leadenhall Street, 45 Cornhill and at ‘The Golden Blunderbuss’ 59 Lombard Street, between 1762 & 1879. The Bond’s made and supplied firearms to The British East India Company. A member of that family, William Thomas Bond, is recorded as working as a Gunsmith on his own at the family addresses in 1836. A William Bond is also recorded as working as working with Edward Bond at 45 Cornhill, 1826-1855.

These pistols are virtually identical in design and aesthetic, just differing in overall size and caliber. They both feature attractive engraving with the maker’s mark displayed prominently on the sides of the frames. Both feature turn-off, deeply rifled barrels for tool-less loading and folding triggers for sleeker carry. Simply cock the action and the trigger drops down for firing. The first pistol has a barrel length of 3-3/8 inches and is .54 caliber. The second pistol has a barrel length of 1-5/8 inches and the caliber is .50. The larger one might have been carried on the belt, while the other would have been ideal for a pocket. Pistols like these were commonly carried in pairs due to their single-shot capacities and relatively tedious reload times. Many carried a matched pair with matched ammunition, so it is interesting to see someone have a pair of carry guns of the same design but with differing calibers! The case they come displayed in was nicely made at a later date and fitted to these pistols. Outer dimensions are 12x8x3 inches. They make a handsome display and would fit nicely in an office or library.

The overall condition is very good. The metal surfaces bear a light gray patina. The markings and engravings are clear. The walnut grips are in great shape on both pistols. The bores are in very good condition, clean with sharp rifling. The actions on these pistols are excellent.