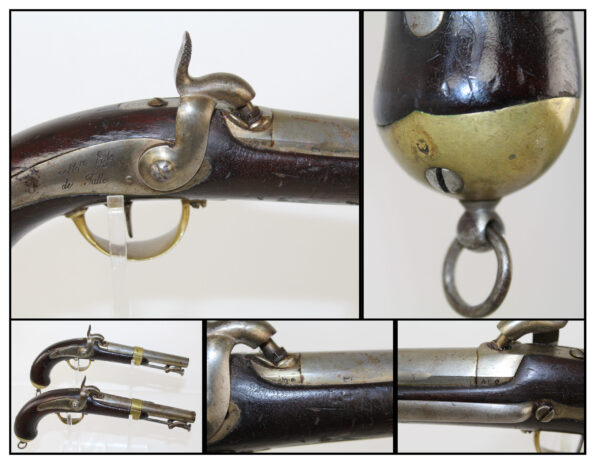 Identical Pair of Very Nice Pistols Made at Tulle

Here we present a matching pair of French antique Model 1837 Marine Pistols, each made in 1842 at the French arsenal at Tulle. These were made for Marine troops aboard ships to board other vessels or repel boarders. These would have been in use during the French colonial period and would have been witness to the political turmoil that would be the French government in the middle of the 19th Century. Napoleon’s nephew Napoleon III would take the presidency of the Second Republic and then make himself emperor shortly thereafter.

These pistols are equipped with some very thoughtful features for sea-faring fighting men. Each pistol has a long belt-hook on the side opposite the lock, lanyard retention rings on the pommels, and captive ramrods. As one may imagine with so much salt water, retention would have been crucial on the high seas. Neither were made with front or rear sights as these were meant to be used at very close range. These pistols are virtually identical in every way, including their markings.

Each of the back-action locks is marked “Mre Rle de Tulle”. Each barrel is dated “1842” on the right side of the barrel, just under the nipple bolster. Each of the barrel tangs is marked “Mle 1837”. Many small inspection and acceptance marks may be found throughout. Each has a naval anchor mark on the brass pommel.

The overall condition of each is near fine. The finishes are bright with light gray patinas. The markings are clear and legible. The bores are smooth and bright. The stocks are in very good condition, each showing appropriate handling marks. The actions on these pistols are excellent. Here is a fantastic pair of French Marine Pistols!