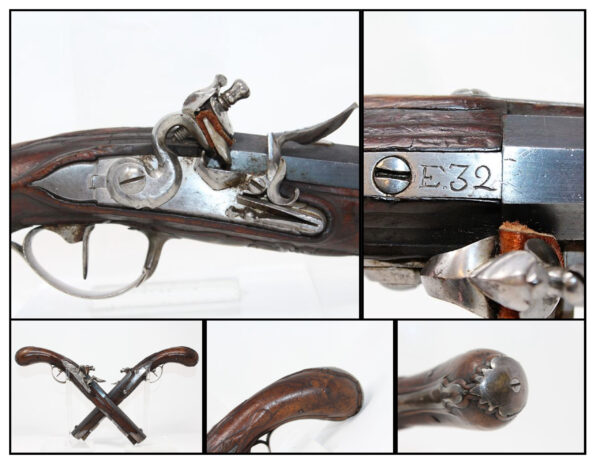 Here we present a pair of antique French Flintlock Officer’s Pistols, made circa the mid-1700s near the end of the 1st French Colonial Empire. The “1st French Colonial Empire” was the period from the 16th century onward through 1814 during which France grew as an empire globally through colonization. During this period, the French were involved in the Seven Years War as well as the French & Indian War and the American Revolutionary War, not to mention the Napoleonic Wars.

These rifled pistols are of medium size with .48 caliber bores. They each have barrels that begin octagonal and transition to round. Each is equipped with a good set of sights, especially for this period when many such pistols simply had a front sight or none at all. Each of the barrel tangs is marked consecutively “E 31” and “E 32”. The stocks are carved throughout, though not too ostentatiously. The hardward is plated in silver, along with the barrels. The ramrods are tipped in horn. These handsome pistols would have been worn on the belt or in pommel holsters. This would have been the type of pistol an officer purchased on his own to bring to battle in case he were to come into contact with the enemy.

The overall condition for both is very fine. 80% of the silver finish remains. The markings are clear and legible. The stocks are in great shape. The pistol marked “E 31” has a hairline crack on the left side of the gun that is stable. The bores are both bright with strong rifling. The action is excellent on both pistols, strong and crisp. Here are two gorgeous pistols from the 18th Century! If only they could tell stories!