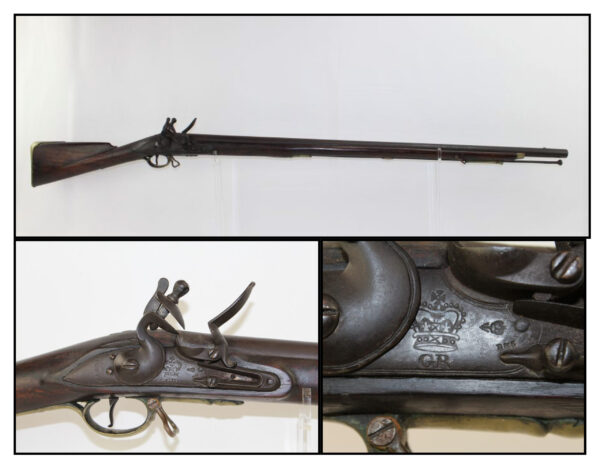 Here we present an antique Brown Bess Pattern 1793 Flintlock Musket by Blair & Sutherland, made in England circa the late-18th Century. The Brown Bess was a British musket that was in use from the 1720s to the mid-19th Century and is perhaps most notable to Americans as the musket the British used during the Revolutionary War. This pattern of Brown Bess was the same that fought Napoleon Bonaparte in numerous iconic battles, as well as the United States and their American Indian Allies during the War of 1812. This pattern may also correctly be called the “India Pattern” since the Honorable East India Company was the entity responsible for this update to the gun that had been around since 1722. When war with France loomed on the horizon, the British Board of Ordnance diverted these muskets from the EIC contract to supply the war effort. The success of this model can be gauged by the fact that between 1795 and 1815, nearly 3,000,000 gun were produced. Although the Birmingham gun trade was responsible for the majority of the production, the London gun trade played a part, through gun makers such as Ezekial Baker, William Parker, Thomas Reynolds, and Durs Egg. According to the London proof-house records, they and others in London were responsible for producing 845,477 muskets.

The overall condition is very good. The iron parts have an even, dark plum color. The tint of age and verdigris can be seen on the brass. The markings are clear. The stock is in great shape. The bore is smooth and dark. The action is excellent. Here is a great example of a scarce and desirable British Brown Bess Flintlock Musket with great relevance to the history of the United States as well as Europe!