‹ Back to the shop
View cart “INDIAN WARS Re-Armored COLT M1860 ARMY .44 Caliber REVOLVER Six-Shooter CIVIL WAR Colt Re-Built for the WESTERN FRONTIER!” has been added to your cart. 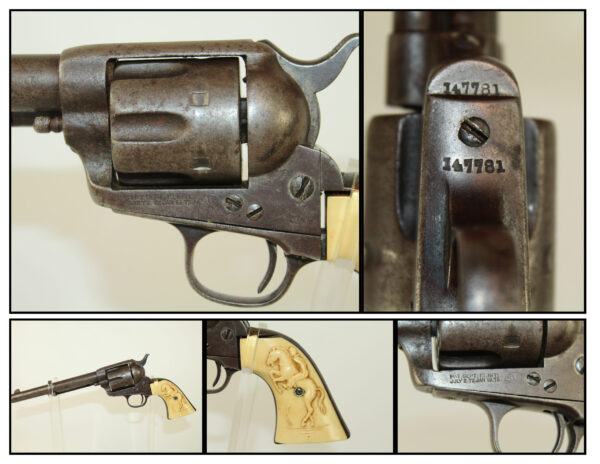 Authentic Pre-1899 Manufacture and therefore no licenses required for purchase or shipping. We are allowed to ship direct to door for any deliverable address worldwide.

Antique Single Action Army Made in 1892

Here we present an antique Colt Single Action Army, made in 1892, in Hartford, Connecticut. The Colt SAA has become one of the most iconic firearms in history, especially with regards to the American West and in film. Though Colt enjoyed the largest contracts of any handgun maker during the American Civil War, it had to rely on its array of percussion fired revolvers, namely the 1860 Army, until the Smith & Wesson owned Rollin White Patent expired in 1869. This enabled them to begin making revolvers with completely bored through cylinder chambers in order to utilize modern metallic cartridge ammunition in the most effective manner. In 1869 Colt’s began development of a suitable cartridge revolver in earnest, first coming out with a number of conversions for their percussion lines, until 1872 when they debuted what was to become the Colt Model 1873 Single Action Army in the 1872 U.S. Trials. Needless to say, it won, and became the Army’s revolver of choice. It also became the sidearm of choice for many others like cowboys, guards, lawmen, crooks, shopkeepers and all manner of civilians.

This piece features the Colt Black Powder frame that preceded the more modern “smokeless” frame. The revolver is chambered for .45 Colt, the venerable man-stopping cartridge adopted by the U.S. military in the late 19th Century. The top of the barrel reads “COLT’S PT.F.A.MFG.CO./HARTFORD, CT U.S.A.” The side of the barrel is marked “45 COLT” The left side of the frame is marked ““PAT.SEPT.19.1871/JULY 2.72. JAN 19.75”. The grips are ivory white Franzite that bear a rearing horse and rider on the left side and a swooping eagle on the right. The inside of each panel reads “SPORTS INC./CHICAGO”. This company manufactured these grips circa the 1930s to 60s.

The overall condition is very good. The metal surfaces are dark with age. The markings are clear and legible. Serial numbers match. The hard rubber grips are in good condition. The bore is sharply rifled and clean. The action is strong. Overall a very honest 125+ year old Peacemaker!

Free shipping. Authentic Pre-1899 Manufacture and therefore no licenses required for purchase or shipping. We are allowed to ship direct to door for any deliverable address worldwide.