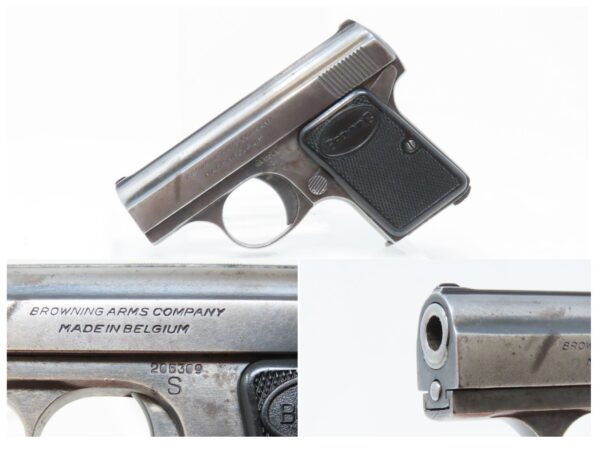 Made by FABRIQUE NATIONALE in Herstal, Belgium

Here we present a C&R Browning “Baby” Semi-automatic Pistol made in 1959 in Herstal, Belgium. The Fabrique Nationale Browning Baby is a small blowback operated semi-automatic pistol designed by Belgium born Dieudonné Saive chambered in .25 ACP. The pistol features a six-round magazine capacity and is a striker-fired mechanism. FN manufactured and marketed the Baby Browning from 1931 until 1979, though exports to the United States only took place between 1953-1968. About 550,000 total units were produced.

The halt to exports to the U.S. in 1968 was mandated by the Gun Control Act of 1968, which was precipitated by Robert Kennedy’s assassination involving an Iver Johnson manufactured revolver. This piece of legislation was signed into law by then President Lyndon Johnson. It forbade the importation of certain firearms, among them the 1931 Baby Browning, but it didn’t forbid the domestic production of these same weapons.