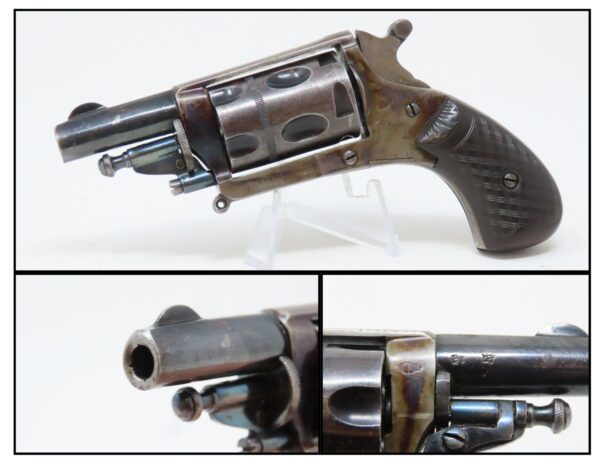 Used by BICYCLIST to Ward off Dogs!

Here we present a C&R Belgian Velodog-style Revolver (also known as a “Revolver de Poche), made circa the early 1900s likely in Liege, Belgium. The Velodog was a French design by Charles-François Galand specifically made for carry by cyclists to defend themselves against dogs. In fact, the name “Velodog” combines the word “Velocipede” with “Dog”, which is quite interesting. It was copied & produced all over Europe into the beginning of the 20th Century. It features a small size, a smooth external hammer, and folding trigger.

Another feature on many late models Velo-Dogs is the lack of a trigger guard, and a trigger that folds into the body of the weapon when not in use. For the more humane, there were cartridges loaded with cayenne pepper or dust, or which had bullets made from wax, wood or cork.

The overall condition is fine. Blue/case colored finish. Strong action, although the folding trigger does not seat properly and falls with gravity. Bright bore. Firm plastic grips remain in good shape. Here is a stunning example of a Velo Dog revolver to collect and display from early 20th Century Europe!

Very Fast. Very Safe. FREE SHIPPING. Will need to be sent to your local FFL.