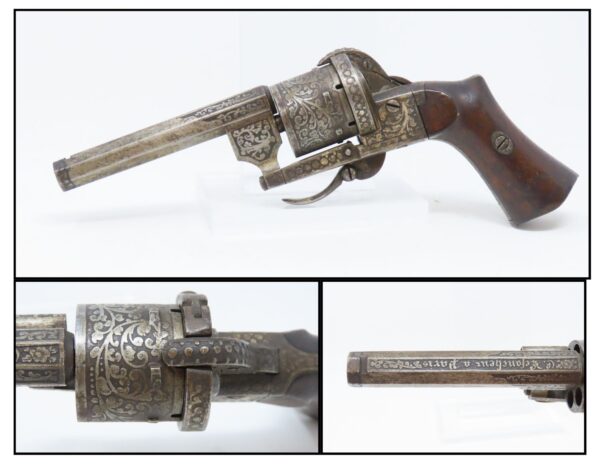 Here we present an antique Belgian Lefaucheaux Double Action Pinfire Revolver in 8mm, manufactured circa the mid-19th Century in Liege, Belgium. This medium bore, single action revolver was quite a favorite with soldiers. It was quite superior in many ways to contemporaneous American designs, most of which were still using the percussion firing system, of which Colt, Remington and Starr were the largest contractors. The biggest exception to that was Smith & Wesson’s No. 2 “Old Army” Revolver, but that was chambered for a relatively small .32 Rimfire metallic cartridge.

A little more history on the Lefauchuexs: In 1835, a notable gun maker and inventor patented one of the first self-contained firearms cartridges, which he had designed back in 1828. This very early design included a case with ball, powder and primer, but what made it different from what was to come later in cartridge development was the “firing pin” that projected out of the side of the case. It was this pin that was struck and detonated the primer inside. His son, Eugene, would build on Casimir’s invention, designing a pistol to take advantage of it. The hammer would be flat and smash down on the side of the cylinder, from which the pin of the cartridge would project. This revolver and pistol design would become prolific, especially in Europe throughout the 19th Century, being adopted by militaries, used by civilians and police, and even being sold for use during the American Civil War.

The overall condition is fair. The action functions, although the cylinder indexing is intermittent. The bore is semi-bright with slight pitting and darkening to the muzzle. The etchings are sharp and contrast well. “C. Lefaucheux a Paris” is marked atop the barrel. Both grips are firm and contain expected handling wear. The front sight is absent. Here is a unique piece of history to collect and display!