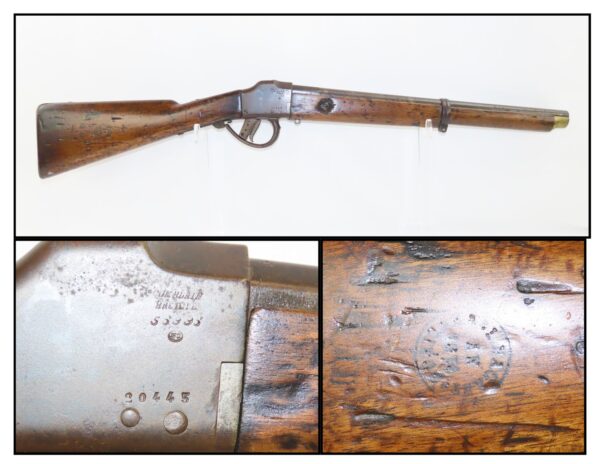 Here we present an antique Belgian Comblain Model 1870 Falling Block Rifle made circa 1870 in Liège, Belgium. The M1870 Belgian Comblain was a falling-block rifle invented by Hubert-Joseph Comblain of Belgium and produced in several variants known as the Brazilian, Chilean or Belgian Comblain. It was adopted by Belgium, Brazil and Chile, but was up against the British Martini Henry Rifle of even better design that dominated most of the 1870s.

“This rifle is called No.2, to distinguish it from the first Comblain, which is a modification of the Snider principle. The Comblain no 2 has the vertical sliding block and guard lever of the Sharp rifle; but the arrangement for exploding the cartridge is different. The mechanism of the lock is fixed in the breech block, which consists of the ordinary main-spring acting upon a tumbler by a swivel. The tumbler and striker are made in one piece; the scear and trigger are also in one piece. By depressing the lever the breech block is brought down, the cartridge-case extracted and the rifle is cocked. A fresh cartridge being inserted, and the lever returned, the rifle is ready for firing. The breech arrangement is strong and simple. It is used by the Belgian volunteers, and has been severely tested both at Liege and Wimbledon.”

The overall condition is good. The action is strong. It has been cut shorter at some point long ago. The bore has become dark from time but remains in good shape. The buttstock has a little movement where it meets the frame. Here is a unique antique piece of history with lots of character.