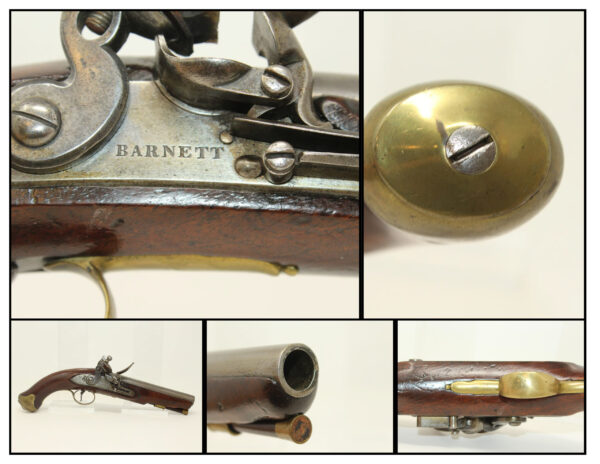 Here we present an antique Light Dragoon’s Flintlock Pistol by John Edward Barnett circa the early 1800s. A series of wars, known as the Napoleonic Wars (1803-1815), was raging throughout Europe as Napoleon Bonaparte sought to expand his empire. The British were one of his key adversaries and the cavalry or dragoons played an increasingly important role in the warfare.

This pistol is marked Barnett on the lock plate. It is the work of English gunmaker John Edward Barnett, who made many guns for the British military in addition to those he made for the British public and for trade with the natives in the New World. It is stocked in European walnut and trimmed in brass furniture. It is large and has a .63 caliber smooth bore. This handsome pistol would have been most at home in a saddle mounted pommel holster when not punching large holes. The left stock flat is marked with a large script “S”. The top of the round barrel bears the marks of the Irish Dublin Constabulary as this firearm was evidently registered.

The overall condition is near fine. The bore is smooth and in very good condition. The action is strong and crisp.