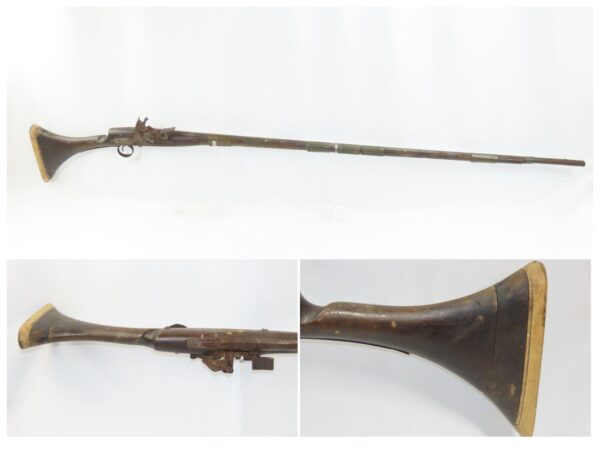 Here we present an antique Kabyle Snaphaunce Musket (also called moukalla), made circa 1800 in the Barbary Coast region of North Africa. The Barbary Coast was home to much upheaval, as many of the various kingdoms that made it up were member states of the Ottoman Turkish Empire. Pirates found their safe havens on the coast and raided the Mediterranean Sea and taking slaves. The slave trade was another unsavory reality of the northern coast of North Africa. In fact, piracy and the taking of European and American slaves came to be so great a problem at various points over the centuries that nations like Spain and even the U.S. took military action—Spain in the 1730s and America in 1805.

The snaphaunce lock was one of the earliest flintlock systems. These types of locks were used with this style of musket in Africa for a very long period, one source stating from the 17th through the 20th century.

The action does not function. The bore is smooth and dark. Absent ramrod. A slight bend in the muzzle is present.