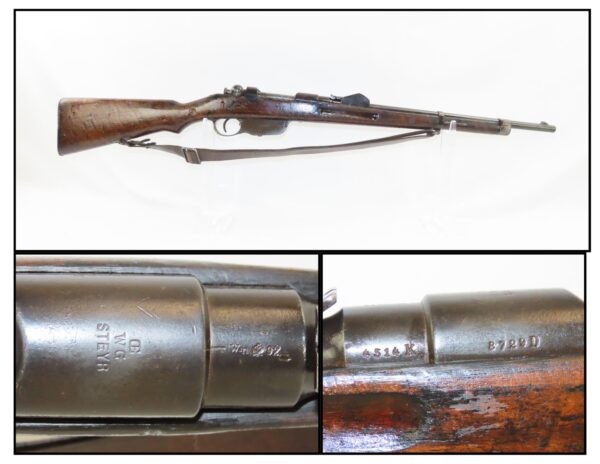 Here we present an antique Austrian Steyr Model 1890 Stutzen Straight Pull Rifle, made circa 1892 in Austria with a production run between 1891 and 1896 with a total of 115,218 examples manufactured. The Repeating Carbine Model 1890, also known as the Mannlicher Model 1890 Carbine is a bolt-action rifle that used a new version of his straight-pull bolt action. It was introduced as an alternative to the Mannlicher M1888 as it was shorter and easier to maneuver with. Three main versions were introduced: Cavalry Carbine, Gendarmerie Carbine and Navy Short Rifle, also known as the “Stutzen”. This rifle is the Stutzen variant which has sling swivels on the underside, a stacking rod and bayonet lugs. It was used by the Austro-Hungarian Navy.

In the 1880s, the bolt-action rifle was a very innovative firearm. One of the leaders in the design of these guns was a man named Ferdinand Ritter von Mannlicher. Mannlicher inverted a straight pull, bolt action rifle that fed from an internal box magazine. In 1885, Mannlicher combined his efforts with the Austrian Arms Factory company at Steyr and formed the Steyr Mannlicher group to produce a new rifle that fired black powder 8x50R cartridges, the Model 1888. Though these rifles were well accepted by the Austrian military, they were short lived due to the introduction of smokeless powder. Though they were black powder, they were still in service at the beginning of World War I and did see service.

The overall condition is good. The action is strong and smooth. The bore is mostly bright throughout, except for a spot of pitting or two. This example has a solid stock despite the few period repairs. The numbers on this example do not match. Included leather sling is in good shape.