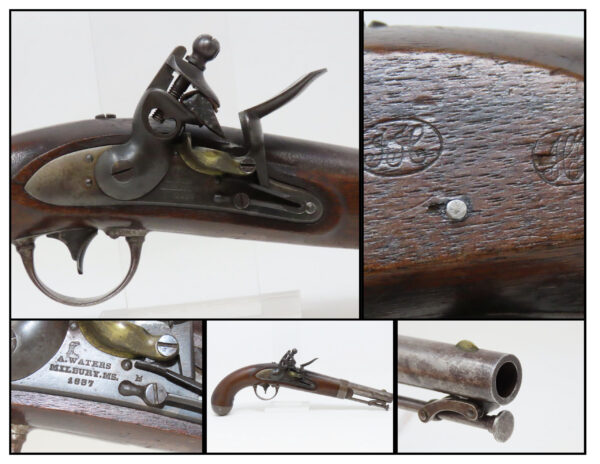 STANDARD ISSUE of the MEXICAN-AMERICAN WAR!

Here we present an antique A.H. Waters U.S. Model 1836 Flintlock Pistol, made in 1837. There were actually two manufacturers of this model: Asa Waters and Robert Johnson. Combined, the production totals 41,000 guns. This was the last U.S. martial pistol to use the flintlock system, and many consider this the best of all U.S. flint guns due to its craftsmanship and aesthetic appeal. The gun is historically significant as this was the primary issue pistol during the Mexican American War (1846-1848) and was even significantly used during the American Civil War (1861-1865), especially in the percussion converted format.

The lock plate showcases an eagle’s head above “A.W. WATERS/MILBURY. MS./1837.” The top of the barrel reads “U.S./JCS/P” (JCS for John C Stebbins), “H” and “K” ordnance inspection marks can be seen on many components. The left stock is stamped with inspector’s initials “JH” and “HKC,” Joseph Hannis and Major Henry Knox Craig.

The overall condition is fine. This pistol has a nice, even patina throughout. The action is strong and tight. The bore is in great shape throughout. All markings are clear and crisp. Many of these were lost to attrition during the various conflicts listed above, and many were converted to percussion for use by the North & South during the Civil War. Here is a true survivor in its original flintlock state! This is one of the best we have seen!