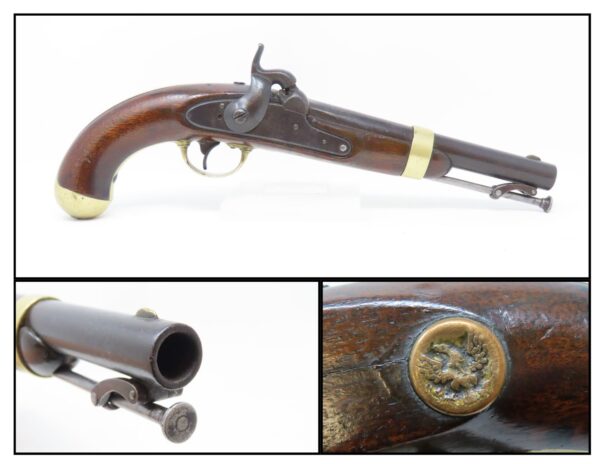 Made Just After the Mexican-American War in 1849

Here we present an antique Henry Aston U.S. Contract Model 1842 Dragoon’s Pistol with an 1840s Eagle “A” Artillery button set into the stock flat, made in 1849 in Middletown, Connecticut. Henry Aston was a gunmaker from Middletown who received a government contract to produce 24,000 Model 1842 pistols in his first contract for the firearm that spanned from 1846-1851. Between 1851 and 1852, he received a second contract for an additional 6,000 units. The Model 1842 saw service during a time of great change and increasing tension, as well as firearms innovation. The Mexican-American War (1846-1848), the numerous conflicts with Native Americans, annexing of new territory, the rising blood-pressure over slavery, and a quick 36% population increase that all culminated in the blood-letting of the American Civil War. This was the first official percussion pistol to be adopted by the U.S. and simultaneously the last large smooth bore single shot pistol. By 1845 it was the primary issued weapon to the First and Second Regiment of Dragoons, replacing many of their Model 1836 flintlocks, just in time for the Mexican-American War. The Model 1842 was the last single shot smoothbore pistol issued by the U.S. Army.

This one has the distinction of having had a c1840s gilded brass Artillery uniform button pressed into the left stock flat. The eagle is somewhat primitive and the “A” on the shield is rather large in comparison to other variants around that period. The lock is marked “U.S./H.ASTON” in the center and “MIDDTN/CONN/1849” on the tail. The left side of the barrel is marked “US/S.K/P”—S.K for S. Knows, Ordnance inspector.

The overall condition is very good. The iron parts have a dark, even patina. The markings are mostly clear and legible. The stock is dark, smooth and solid, despite the small crack on the left. This crack is stable and not unusual for this model at the lock screw head and it was probably aided by the button. The bore is smooth and dark. The action is excellent, strong and crisp. A very interesting Aston!