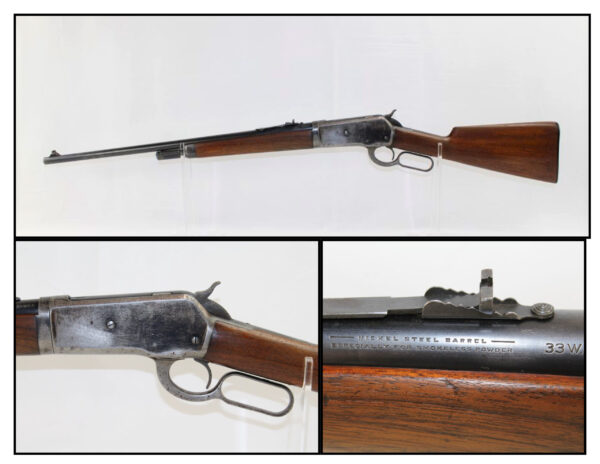 Here we present a Winchester Model 1886 Extra Lightweight Lever Action Takedown Rifle, made in 1907 in New Haven, Connecticut. The 1886 was a collaboration between John Moses Browning and his brother, Matthew Sandifer Browning, to build a big game rifle to replace the Model 1876. This was Browning’s first repeating rifle design adopted by Winchester. The 1886 rifle, often called “the best rifle in the world”, even made Theodore Roosevelt, later President of the United States, very fond of the large caliber Model 1886 working rifle during his western adventures on the plains. From 1886 through 1935, almost 160,000 carbines and rifles were produced with calibers that ranged from the smaller 33WCF to the largest, 50-100, with the most popular caliber being the .45-70 and the 45-90. This rifle was a great improvement over the Model 1876. Its shorter, streamlined frame proved very popular and was well received by sportsmen, shooters, and law enforcement groups alike.

By today’s standard, referring to a 7½-pound hunting rifle as “extra light weight” might be open to debate, but at around the turn of the last century, this big-game lever-action rifle was state-of-the-art. Winchester also took note of its popular lever-action’s heft and introduced the 1886 Extra Light Weight in 1896. Chambered in .45-70 Gov’t and featuring a 22-inch round, tapered barrel, a half magazine, a hard rubber shotgun buttplate and a straight-grip stock, this was also Winchester’s way of eliminating many special order options. In 1902, the Extra Light Weight, like this one, was also chambered for the .33 Win., albeit with a 24-inch barrel. The Extra Light Weight was discontinued in 1919. Not many of these slimmed-down ’86s were produced, making them one of the more desirable Winchester variants.

The overall condition is near fine. The original blue finish is 85%. The markings are clear. The walnut stock shows use and remains smooth and solid. The bore is shiny bright with sharp rifling. The action is excellent. Here is a really neat 1886 with lots of special features!

Barrel is 24 inch round.