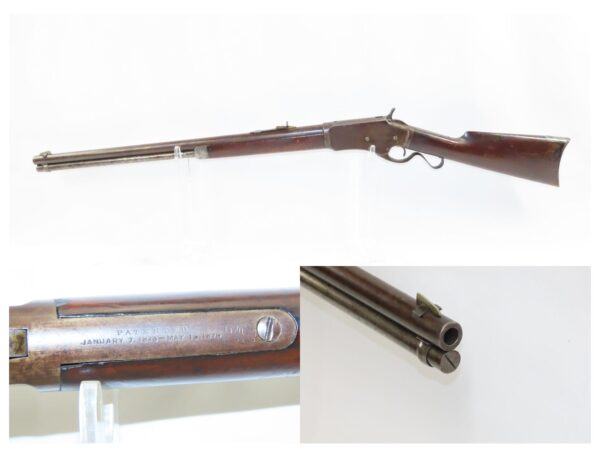 Here we present an antique Whitney Kennedy Lever Action Rifle in .44-40 WCF, made circa the early-1880s at the Whitneyville Armory in New Haven, Connecticut. In 1880, Samuel V. Kennedy and Frank W. Tiesing redesigned the 1878 Burgess rifle to accept the popular .44 Winchester Center Fire cartridge. With the basic machining already in place, the transition was rather inexpensive. The last Burgess was shipped from the factory in March 1880 and the first Kennedy was also shipped in March 1880.

The Whitney Kennedy was the next iteration of the Whitney Burgess Rifle which was designed by Andrew Burgess. Production was short-lived with only about 15,000 of all variants from 1880-1886. Obviously, Winchester was the top choice for most in the lever gun market during this period with over 222,937 Winchester Model 1873s having been made by the end of 1886.

The most distinctive visual feature of these rifles was the unique “Burgess” serpentine style of lever that was used until 1883. With the Burgess Serpentine style of lever used here, that would date this one being manufactured between 1880-1883. It comes with a 24-inch round barrel chambered in the venerable .44-40 WCF. Just like the Winchester 1873, this rifle would have been a great companion to a Colt or Merwin Hulbert revolver in the same caliber.

The overall condition is very good. Original finish/patina. Robust action. Good, clear bore. Sturdy walnut stock with an average amount of wear. By the look of the butt plate it appears that this rifle probably saw the inside of a saddle scabbard as the rest of the steel parts are not as weathered. The rear sight riser is a hand-made replacement. Here is a great and distinctive lever action rifle that would have been a trusty alternative to the Winchester of the day, the Model 1873.