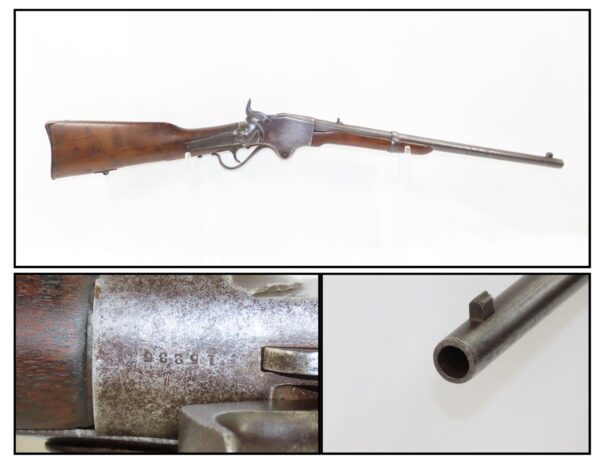 Here we present an antique Spencer Repeating Rifle Co. Model 1865 Repeating Carbine, made circa 1866 in Boston, Massachusetts, just after the Civil War. The Model 1865 carbines were lever-operated, breech-loading rifles that were marvels of the time and had a lasting impact on how war was to be fought in the future. Though their service life in the U.S. military was relatively short, the Spencer story includes Christopher Spencer, the inventor of the rifle, demonstrating and shooting with President Abraham Lincoln, who gave his full endorsement of the piece.

Supposedly, during the battle at Gettysburg, a captured Rebel that day said one could “load in the morning and fire all day!” This was due to the Spencer’s most endearing quality: a 7-round magazine tube in the butt of the gun. This gave the shooter phenomenal firepower in a day when most soldiers were muzzle-loading single shots or even singly loading their breech-loading carbines. Approximately 34,500 Model 1865 Spencer carbines were produced by Burnside Rifle Co., along with another 24,000 made by Spencer Co.

This carbine would have been used after the Civil War in the Reconstruction period and throughout the Indian Wars.

The overall condition is good. Strong action. This example has a good bore. Lots of evidence that this carbine saw lots of use and exposure to weather. The stock is solid, but does show some chips and stable cracks. Here is a Spencer carbine that looks like it lived anything but a sheltered life.