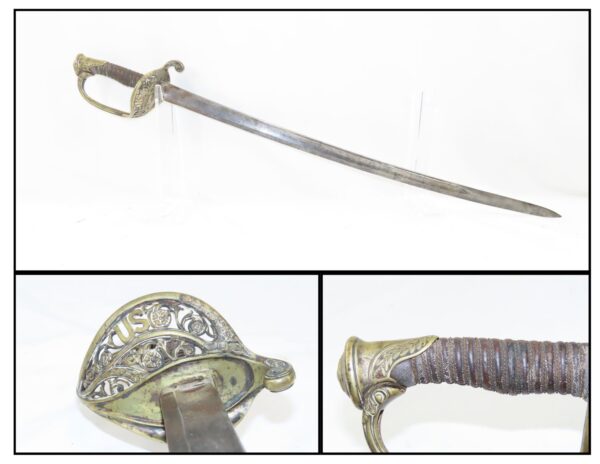 Here we present an antique Civil War Era French Made Klingenthal U.S. Model 1850 Staff & Field Officer’s Sword made circa 1850 through 1865 in Klingenthal, France. Regulation French swords of the 19th century were primarily issued by two major government manufacturers, those being Klingenthal, in the east of France and later, Chatellerault in the center of the country. At the beginning of the 18th century, King Louis XV created a state-controlled sword manufacturing company in order to limit the imports of Solingen blades to France. The Alsace province in the east of France was chosen for the availability of iron mines, forges, and wood for charcoal. In 1768, accommodations were built in a place called Klingenthal (Klingen=blades, and thal=valley), so the factory became “Manufacture de Klingenthal”. Under this name, thousands of blades were produced until the end of the 19th century. Klingenthal has since been known as a producer of fine swords.

Europe was relied on to supply both Union & Confederacy with arms, especially initially in the case of the Union North. Blades came out of Prussia as well as France, and everyone was unloading all their most obsolete but still serviceable musketry.

The overall condition is good. Faint patriotic etchings remain. The blade is slightly bent forward of the fuller and could be straightened. The back of the blade is inscribed “Manuf de Klingenthal Coulaux & Cie”. The hand guard has a little wiggle. The wire is tight around the leather grip. The overall length is 35-1/2 inches.