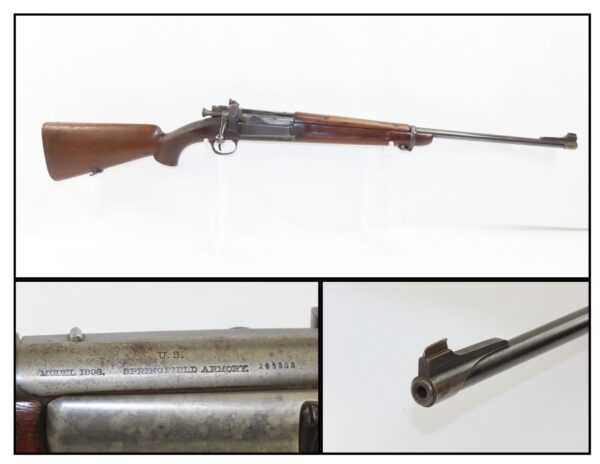 Here we present an antique U.S. Springfield Model 1898 Krag-Jorgensen Bolt Action Sporting Rifle manufactured in 1898 at the Springfield Armory. Named after its inventors, Norwegian Royal Artillery officer Ole Hermann Johannes Krag and civilian Erik Jorgensen, the Krag-Jorgensen rifle was the first small caliber smokeless powder repeating long arm to be adopted by the U.S. Army. This rifle also marked the beginning of the change from large caliber/low muzzle velocity ammo to smaller caliber/higher energy rounds for military applications. Fifty-three different models were tested and rejected before the Army’s 1892 adoption of the Krag-Jorgensen.

Militarily speaking, the Krag was probably obsolete as a military rifle soon after it was adopted by the United States Army. The Krag required dropping one cartridge at a time into its magazine to load it. That was slow compared to the Mauser Model 1893 the Spanish used during the Spanish-American War, which used a strip of cartridges to recharge its staggered-box magazine in one motion. As a result, the Krag was replaced with the 1903 Springfield. The Krag-Jørgensen and the .30-40 cartridge were and still are popular for hunting, and many surplus rifles, like this one, were sporterized.

The overall condition is very good. Strong action. The bore is bright and reflective. This example sports a stolid stock that contains a few stable period repairs. Sharp markings. Here is powerful and wonderful antique rifle for the collection!