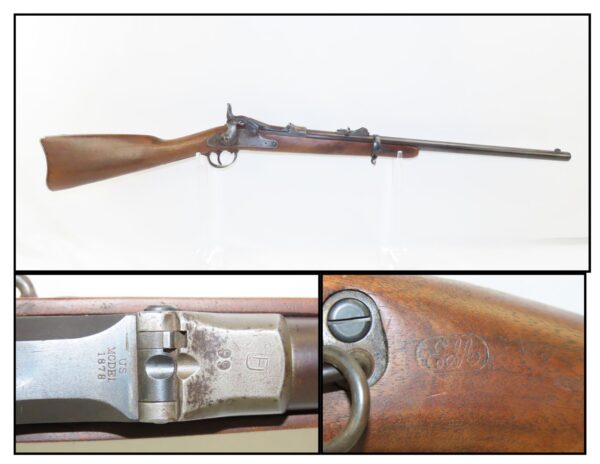 Here we present an antique U.S. Springfield Model 1884 Trapdoor Saddle Ring Carbine, made by the Springfield Armory. This rifle was manufactured in 1886, towards the closing end of the Indian Wars and just a few years before the Wounded Knee massacre. After the Civil War, the War Department wanted a breech-loading rifle. To be specific, it wanted a breech-loading rifle that would chamber a self-primed, metallic cartridge.

The overall condition is very good. The action is strong. The bore is bright. The cartouche on the left wrist remains sharp! “US” is stamped on the butt plate tang. A circle “P” can be seen behind the trigger guard on the wrist. The “F” in the box and the “99” were added after it left the armory and may be a specific unit or rack marking. The stock is solid and it has been lightly sanded. A very nice trapdoor carbine by Springfield!