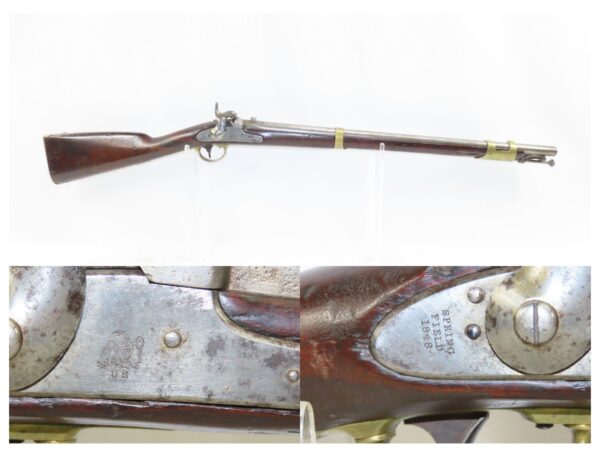 Here we present an antique Springfield Armory U.S. Model 1847 Percussion Cavalry Musketoon, manufactured circa 1848 in Springfield, Massachusetts. Muskets were designed for a dual purpose on the battlefield. They could be used as a ranged weapon, and they could also be used as a pike for short range fighting. Because they were used in a manner similar to a pike, muskets had to be long and heavy, which made them impractical for other uses. Because of this, many muskets were produced in a shorter version, often called a carbine or a musketoon, such as this example. These shorter weapons were often used by naval forces and cavalry. The Springfield Model 1847 musketoon was a shortened version of the Springfield Model 1842 standard infantry musket.

There were three types of musketoons produced at Springfield between 1847 and 1859, those being the Artillery, Cavalry, and Sapper & Miner. Approximately 3,300 Musketoons were produced for the artillery with the total production of all three models estimated at approximately 10,000 carbines.

Along with usage during the Indian Wars and the Mexican-American War in 1846 through 1848, these would have used by both combatants at the outbreak of the American Civil War.

The overall condition is very good. Strong action. The bore is bright and smooth. Solid stock with a stable wrist repair. “US” is marked on the lock and buttplate tang. “1848” dated lock. This example has a hand marked “star” just in front of the trigger guard on the underside of the forend.