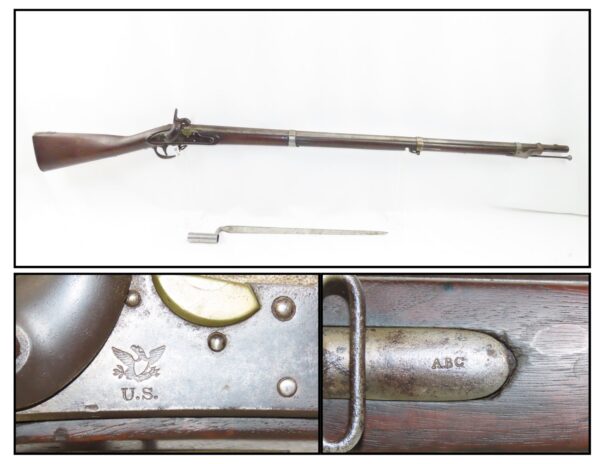 Converted Flintlock to Percussion with BAYONET

Here we present an antique Springfield U.S. Model 1816 Conversion Musket, manufactured at the armory at Springfield, Massachusetts, circa 1839. The War of 1812 revealed many weaknesses in American muskets. In an attempt to improve both the design and manufacture of the musket, the Model 1812 musket was created. The Model 1816 made further improvements and replaced the Model 1812. Harpers Ferry became America’s second national armory after the site was personally selected by George Washington, with the Springfield Armory being the first. The U.S. Congress authorized the building of the new foundry in 1794, and by the following year, was producing hundreds of arms for the national army, which was primarily flintlock muskets and pistols. Inspired largely by the French Charleville Model 1777 musket, Harpers Ferry began producing the Model 1816. The M1816 was a smoothbore, muzzle loading weapon which used a .69 caliber musket ball. A trained shooter could fire between two and three rounds at a range of up to 200 yards per minute.

The M1816 was in production at Springfield (325,000) and Harpers Ferry (350,000) between 1816 to 1844 with around 675,000 muskets produced during this run. It saw service during the Mexican-American War and was even pressed into service during the Civil War in both the updated percussion and the old flintlock format. In the 1850’s, many 1816’s, just as this one is, went through the conversion from flintlock to the more reliable percussion system.

The advent of the Model 1842 Musket made the M1816 obsolete, but not unserviceable. Eventually, most made their way to storehouses and armories. Beginning in 1848, when more than 700,000 of all types of flintlock muskets were reported in storage, the most serviceable were converted to percussion ignition. Three types of alteration were performed. All alterations involved grinding the flash pan down and replacing the hammer. The “French Style” conversion added a drum and nipple to the flash hole. The “Belgian Style” involved plugging the vent hole with a weld and tapping a nipple directly into the barrel. This is the type of conversion that was only done at Harper’s Ferry and Springfield and is sometimes referred to as an “armory conversion.” The last type of conversion was used late in the renovation process, beginning about 1852, and involved adding a bolster to the breech of the barrel, so it is termed the “Bolster Style” of conversion.

The overall condition is good. Strong action. The bore is in good condition but does contain a bulge near the muzzle. The bayonet is in very good shape. Solid stock. Cartouche remnants can be seen on the left wrist and the underside of the stock. “1839” dated lock. On the left side of the buttstock, “J. Collins”, appears to be hand carved (it is not the easiest inscription to read even though the characters are about an inch in height). A good example of an obsolescent musket expediently converted for the American Civil War.