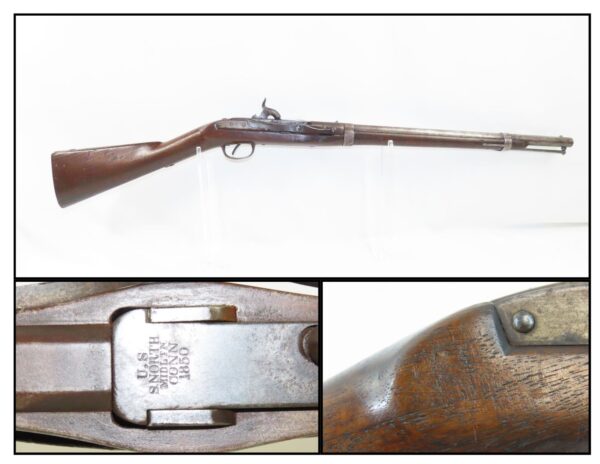 Here we present an antique U.S. Model 1843 Side Lever Breech Loading Saddle Ring Carbine from the Simeon North Contract, made circa 1850 in Middletown, Connecticut. A native of Berlin, Connecticut, Simeon North was a successful manufacturer of scythes before he turned to gun making, eventually becoming one of the major suppliers of firearms to the United States military before the Civil War. 10,500 of these “side lever” Hall carbines were produced by Simeon North in 1844-1853. More than half are believed to have been rifled for use in the Civil War. Most of the rifled carbines were part of the 5,000 rebored and rifled for .58 caliber Minie balls during the “Hall Carbine Affair”.

The Model 1843 Hall/North Carbine was the last of the Hall carbines and rifles issued by the U.S. Army. Model 1843 Hall carbines were carried by U.S. Dragoons during the Mexican War and continued in service through most of the Civil War, being issued to many cavalry units in Illinois, Missouri and Kansas.

The overall condition is very good. Strong action. Good bore. The walnut stock is solid throughout. Markings are legible. “1850” dated breech block. “P.G.” is hand carved into the bottom of the buttstock. A nice example of a rather scarce version of the Hall Carbine!