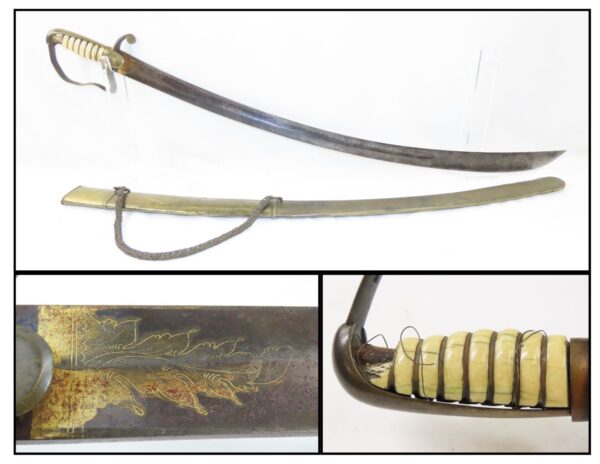 Here we present an Antique U.S. Nathaniel Starr Model 1813 Contract Cavalry Saber, made in Middletown, Connecticut circa 1813-17. This cavalry saber is very similar to the 1812 Contract version, which was based on the British Pattern 1796 Dragoon Saber. This stout cavalry saber is a no-nonsense edged weapon and one of just over 10,000 such pieces made under the Starr contract of January 1813, which superseded his earlier contract from 1812.

Starr was the leading sword maker in America from 1798 to 1830 and his firm produced a variety of military edged weapons, which followed the evolution of early U.S. cavalry Sabers. As changes were requested over the period, new models were made, and new contracts issued to Starr, who remained the choice manufacturer up until the Model 1826 Naval cutlass.

The Saber follows a modified design criterion specified on January 11, 1813 that incorporated a sharper curve to the blade, a pronounced angle to the hilt and a wider opening between grips and hand guard. This sword is fitted with a 33” long curved fullered single-edged blade.

These swords saw much use in U.S. conflicts in the first half of the 19th century, and many were even used during the Civil war. A great example of an early American sword pattern, by the pre-eminent maker of that period. If you are a collector of Early Americana, this sword fits the bill!

The overall condition is good. Blue finished blade with gold accents (some parts remain quite sharp). The grip is cracked and is missing most of the wire. The hand guard is loose around the tang. The brass scabbard has seen better days, despite the dents, its in good shape.