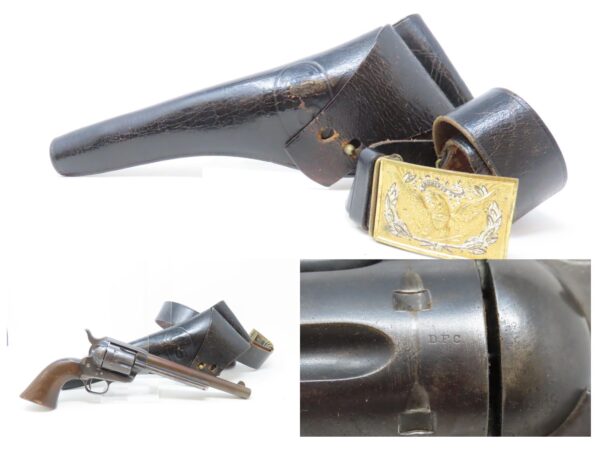 Here we present an antique Colt Cavalry Model Single Action Army Revolver, manufactured in 1887 in Hartford, Connecticut. Though Colt enjoyed the largest contracts of any handgun maker during the American Civil War, it had to rely on its array of percussion fired revolvers, namely the 1860 Army until the Smith & Wesson owned Rollin White Patent expired in 1869. This enabled them to begin making revolvers with completely bored through cylinder chambers in order to utilize modern metallic cartridge ammunition in the most effective manner. In 1869, Colt’s began development of a suitable cartridge revolver in earnest, first coming out with a number of conversions for their percussion lines, until 1872 when they debuted what was to become the Colt Model 1873 Single Action Army in the 1872 U.S. Trials. Needless to say, it won, and became the Army’s revolver of choice. It also became the sidearm of choice for many others like cowboys, guards, lawmen, crooks, shopkeepers and all manner of civilians.

This Colt Single Action Army Revolver was inspected by David F. Clark. His initials may be observed in multiple locations on this revolver. Single letter sub-inspector marks are also found throughout. The left side of the frame was stamped “U.S.” as the final acceptance mark. The top of the barrel is marked “COLT’S PT.F.A. MFG. CO. HARTFORD, CT. U.S.A.” The left side of the frame is marked with patent dates in the years 1871, 1872 and 1875, along with the U.S. marking. It has a blade front and frame notch rear sights, fitted with a smooth one-piece walnut grip. “1887” dated cartouche on the left grip with DFC initials on the bottom.

The belt and holster rig are original. The belt is maker marked though faint and difficult to read. The buckle features the federal eagle with “E PLURIBUS UNUM” in a banner clutched in the eagle’s beak. The holster was made by Lanz, Owen & Co. of Chicago, Illinois. They had a shop at 183 ½ – 189 Lake Street. Lanz was a German immigrant and Owen was a Welsh immigrant. Their work was top-notch and these remain in fantastic condition.

These revolvers saw the end of the Indian Wars as well as the Spanish American & Philippine American Wars. There is a lot of history here.

The overall condition is very good. This revolver has been moderately refinished and has been furnished with a new barrel which has been marked to match the rest of the gun both in number and with regard to inspection markings. Excellent action—all 4 clicks that hold firm in safety, half-cock, and full-cock notches. The cylinder indexes and locks up properly. The grip is in good shape with wear apparent and a short split along the grain. A cartouche remnant visible on the left side which is dated 1887 with the initials beneath a bit worn. The included holster rig is in near fine condition and very rare in its own right as leather tends to deteriorate long before the guns they were made to hold do.