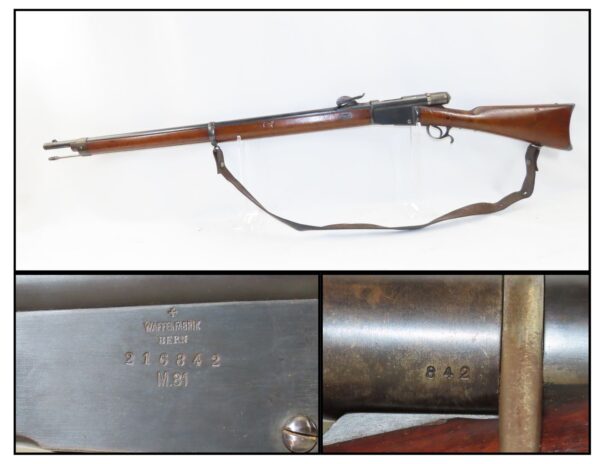 Here we present an antique Swiss Waffenfabrik Bern Vetterli Model 1881 Bolt Action Military Rifle made circa 1881 in Bern, Switzerland. To accelerate the sluggish production of the Vetterli rifles, the federal authorities built a new arms factory in Bern, the Eidgenössische Waffenfabrik (W+F), in 1875. That factory produced the 1878 and 1881 variant of the Vetterli rifle. It featured around 25 improvements over the Model 1871 that included a new bayonet and lug, improved sights and a finger hook on the trigger guard. The total production of the Model 1878 and the 1881 totaled 125,000. This rifle is chambered in the .41 Swiss (officially the 10.4x38mm R Swiss Vetterli M69/81) and is a .415 inch (10.54mm) Swiss military rimfire rifle cartridge.

The Vetterli rifles were a series of Swiss army service rifles in use from 1869 to 1889, when they were replaced with the Schmidt-Rubin rifles. The Vetterli rifles combined the American Winchester Model 1866’s tubular magazine with a regular bolt featuring for the first time two opposed rear locking lugs. This type of bolt was a major improvement over the simpler Dreyse and Chassepot bolt actions. The Vetterli was also the first repeating bolt-action rifle to feature a self-cocking action and a small caliber bore. Due to the Swiss Federal Council’s early 1866 decision to equip the army with a breechloading repeating rifle, the Vetterli rifles were, at the time of their introduction, the most advanced military rifles in Europe. Swiss inventor and gun maker Johann-Friedrich Vetterli designed this rifle in the late 1860s. The years leading up to the 20th Century were characterized by rapidly progressing small arms designs, especially those for bolt action rifles, but for a short period of time, the Vetterli could claim the title for most advanced. Modified Vetterlis were also used by the Italian Army. This Swiss military rifle held 12 rounds of 10.4mm Rimfire cartridges, giving it a lot of firepower.

The overall condition is fine. Original finish. Excellent action. Bright bore throughout. The stock is solid all around with less than an expected amount of wear. The numbers match. The leather sling is in good shape.